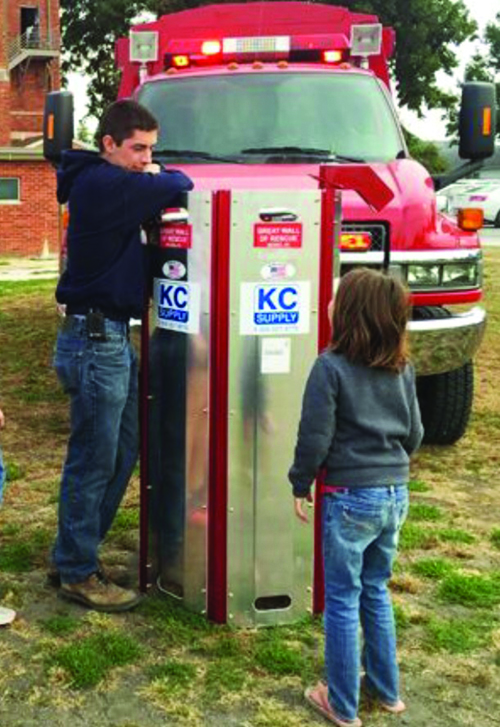 Seventeen-year-old Noah Sellars of Winchester worked hard to secure a device no one wants to use.

Recently, the Winchester High School senior chuckled at the irony of his successful campaign to obtain a grain rescue tube and training for emergency responders and farmers across Scott County. “You hope you never use it,” Sellars said of the rescue tube. “But when you have it, you’ve got a measure of security and assurance in case you need it.” Last week, firefighters and emergency responders from 11 fire departments as well as many farmers were trained in the device’s use, emergency responses to grain entrapment and grain bin safety.

Sellars also raised money to cover the training costs. “It’s a wonderful opportunity for us to extend this service to the community, but

it’s something we never want to use,” said Paul Reuter, chief of the 20-member Winchester Fire Department.

“Safety is a top priority at CGB, and we spend a tremendous amount of time and effort ensuring our employees are operating in a safe manner,” said Matt Nidlinger, CGB’s general manager of the Naples region. “We’ve made this investment to further increase safety awareness within our community, and to help protect our customers and community members.”

Scott County Farm Bureau donated money for the project. “Noah took it upon himself to solicit businesses (for the device and training),” said Wayne Brown, county Farm Bureau president. The teen also worked to obtain training for firefighters, rescue personnel and farmers, Brown pointed out.

“Just knowing there is a chance to save somebody or to have that chance is exciting,”

As for the young man who spearheaded the project, Reuter praised his compassion for his town. Sellars’ involvement in local emergency

medicine started before he could drive. The youngster would convince his parents to drive him or ride his bicycle to a scene. “He does a wonderful job in EMS (emergency medical service); he’s caring, and caring about the people,” Reuter said.

After learning that other communities obtained rescue tubes, Sellars said he thought his town could use one, too.

The nearest rescue tube was located 18 miles away — too far when minutes count. The teen stepped up, writing letters soliciting donations on behalf of the fire department and emergency squad. No one questioned his youth, he said. “They saw this was something that was needed,” Sellars said.

“A lot of money was put into the program, which tells me people care and support us,” Reuter added. “We want to make this the best we can.” That care extends to farmers throughout Illinois. Reuter stressed the importance of

farmers wearing a harness or a rope when entering a grain bin. “It’s not worth taking a chance to enter a bin by yourself,” he added.

Sellars, president of his FFA chapter, remained modest about his efforts and believed others could achieve the same success. “All you have to do is recognize a need, and all the pieces will fall in place,” he said. “People will recognize that (need) and will help you get it done.”