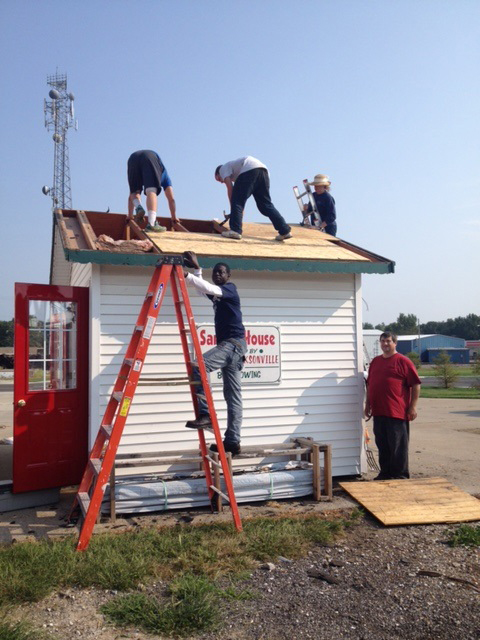 Red lights will be flashing and the sirens will blare when Santa arrives on the Jacksonville square!

The traditional Santa parade will begin Friday, Nov. 27 at 6 p.m. on the north side of the square. Santa will surely be pleased when he sees all the parade goers and his newly updated house.

A new, bright red metal roof has been installed by the Lincoln Land Community College-Jacksonville construction class, taught by Bob Collings. Also, on the exterior, the LLCC class replaced several sections of damaged siding, secured the flower boxes and painted all the trim. The old, white wooden doors have been replaced with new metal doors that were painted bright red to match the roof, courtesy of Stewart’s Auto Body of Jacksonville. Home Depot ordered the materials needed to complete the projects.

Tom Winner of The Heart of Jacksonville said some improvements have been made to Santa’s house over the years, but this has been the most extensive work performed to date.

“I was excited when Tom (Winner) contacted me and asked if we could help repair the Santa House,” said Collings. “It not only gave the LLCC students a learning experience, but also a chance to participate in a community service project.” The LLCC construction students are William Alexander, Jessica Clinton, David Eyrse, Tony Guimba, Logan Hynes, Darrell Johnson and Elaine Novak.

Winner recalls, “Before Santa’s house was built, Santa could be found at the Sears and Roebuck store, at #46 on the north side of the square. Seated in his large red chair, Santa greeted customers young and old as they entered the department store.”

This year marks the 40th birthday of the Santa house, which originally had a red wooden exterior with white trim. In 1975, downtown Jacksonville merchants and local lumber yards donated the building supplies and provided financial support to have the house built by master carpenter Gary Donovan.

“I built my first home in 1972 and the Santa house was the second house I built; it kick-started my career,” said Donovan. “At the time, I was the building inspector for the city of Jacksonville, and Joe Grojean encouraged me to become a builder; he was my mentor. Bob Ward, now deceased, did all of the electrical work.”

Inside the recently updated house, Santa will find new floor covering, which was donated and installed by H.B. Sablotny. And again this year, Nancy Bork will put the finishing touches on the beautifully designed decorations. Bill’s Towing will safely transport Santa’s house to the south side of the square for the Christmas season, as has been done for many years.

The Heart of Jacksonville is the driving force behind the Christmas decorations and Santa’s house on the square, but many others assist with the success of the displays and the parade. The Jacksonville downtown maintenance department, under the direction of Terry Chumley, installs the lights and assembles the holiday exhibits. “The city has promised to go all out on the decorations. We will really sparkle even more this year,” said Winner.

Sarah Hatalla coordinates the parade lineup, while the fire and police departments lead the parade and provide security for the event. After the parade, hot chocolate and treats are available to parade goers, courtesy of Ponderosa.

Several local musicians, such as The Chosen Ones, and Rod Nicholson and Chris Hemmill, have entertained the crowds in past years. Santa met with 1,267 children last year.

Santa’s visiting hours begin Saturday, Nov. 28 from 2-4 p.m. His hours will be posted on the front of his house. Two weeks after he arrives, the Elks Club will host Breakfast with Santa on Saturday, Dec.12 from 9-11 a.m. Donuts, milk, coffee and orange juice are available. The breakfast is free and open to the public.

The Heart of Jacksonville is grateful for all those who have contributed to the success of the Santa house and the parade.