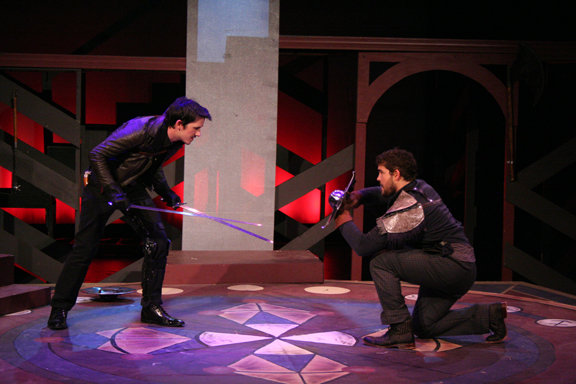 November is finally here and I’ve been anxiously awaiting it’s arrival because of the 3 theatrical events we have coming our way this month! The plays that are being produced this month are perfect examples of how eclectic and varied our theatre programs are in Jacksonville. Rarely do you see a community that produces the kind of work and professionalism and talent with such abundance. These three events are definitely “must see” productions.

The first example is a show that has already had a performance by the time this article is printed. You’ll only have one weekend left to see this classic and historic piece. Illinois College TheatreWorks is producing one of Shakespeare’s Histories, Richard III. Nancy Taylor Porter directs IC’s first Shakespearean history play with a stellar cast that includes students: Drew Stroud, Brooke Kuchefski, Matt Woodson, Brianna Klein, Max Valdez, Squire Prince, Tamar Norville, Austin Phillips, Jasmin Falk, Amber Rak, Marius Kaisig, Hyelharra Banu, Courtney Dietz, James Hills, Cole Litwiller, Allen Miggins, Maria Wittenauer. And from the community, actors: Sherri Mitchell, Kevin Klein, and Keegan Newman. In her director’s note, Nancy says this about her production: “ Richard III was enormously popular in its day. It was also the longest play written in English at the time, to be superseded in the near future only by Hamlet. I wanted to make the play accessible to this audience, so I cut it by a third (at full length it would run about four hours) and modernized a little bit of the language, while still retaining

the story. In my quest for relevance, I also wanted the world of the play to look familiar without being quite identifiable. Some productions, including the Ian McKellen film, have chosen Nazi Germany, for instance, as a setting. Rather than picking a particular historical era, I asked the designers to create a space and a look that would let audience members know that while people here spoke poetry, these characters are their contemporaries.” I asked Nancy to tell me why audiences, who haven’t seen a Shakespeare play before, should come see Richard III. “This play is accessible for a contemporary audience. Even though Shakespeare wrote with a completely different style of speech, the dynamics of what he wrote and the universality and insight into humanity and the way of the world is so sharp that he still is able to reveal “us” to “ourselves”. Richard III opened on October 30th and finishes its run this weekend with performances Nov 5, 6, and 7 at 7:30 p.m. and the 8th at 2:00 p.m. at the Sibert Theatre McGaw Fine Arts Center. Tickets may be purchase online at http://theatreworks.ticketleap.com/richard3atic/ or by calling 217.245.3471.

The next event to be sure and attend is being presented by the Illinois College Fine Arts Series, which is focusing on works that were: “Made In America”. On November 14, they will be bringing Jacksonville two of Ken Bradbury’s One-Act plays about the Lincolns. Two of the nation’s most well-known interpreters of Abraham and Mary Todd Lincoln, Pam Brown and Fritz Klein, will appear together in Bradbury’s one-act plays. Pam Brown will perform her one-woman show, “Now and Forever,” which was commissioned by the State of Illinois and has played for four years at Springfield’s Old State Capitol, and Fritz Klein will present “The Last Final Measure,” originally performed at the Abraham Lincoln Presidential Museum and on NPR radio. Brown and Klein have often appeared together, but the Illinois College Fine Arts Series will be the first time they have performed these plays in a single evening. The Lincolns will perform on the 14th at 7:30 p.m. at the Sibert Theatre McGaw Fine Arts Center. Tickets are $15 and students are free and can be purchased at the door.

The final theatrical event not to be missed is Playhouse On The Square’s production of the hilarious Tuna Christmas: the second in a series of comedic plays (preceded by Greater Tuna and followed by Red, White and Tuna and Tuna Does Vegas), each set the fictional town of Tuna, Texas, the “third-smallest” town in the state. The trilogy was written by Jaston Williams, Joe Sears, and Ed Howard. The plays are at once an affectionate comment on small-town, Southern life and attitudes but also a withering satire of same. The plays are notable in that two men play the entire cast of over twenty eccentric characters of both genders and various ages. The two men playing these hilarious and at most times, heartwarming roles, are Rich McCoy and Darin Harms. It’s the best way to begin your holiday season…with laughter! Tuna Christmas will perform Nov 20, 21, 27 and 28 at 7:30 p.m. and the 22nd at 2. As always, tickets may be purchased in advance at Our Town Books or The Soap Co. Coffee House or by making reservations at 217-491-3977.