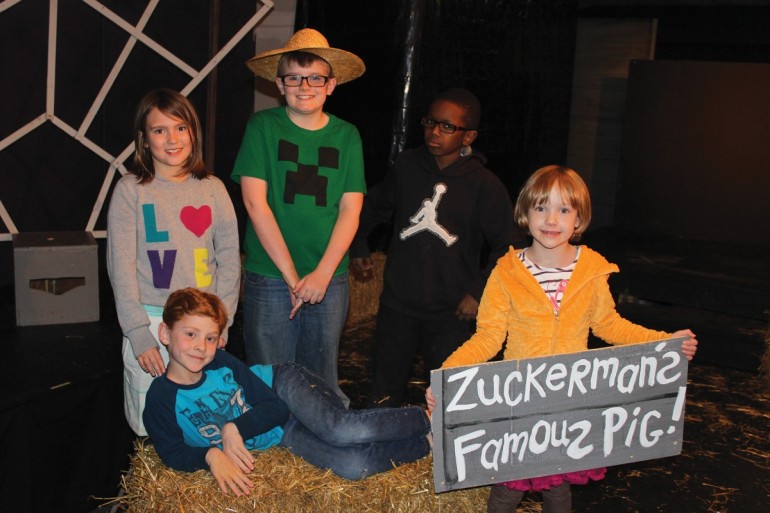 “From you have I been absent in the spring,

When proud-pied April, dressed in all his trim, Hath put a spirit of youth in everything,

That heavy Saturn laughed and leaped with him,” William Shakespeare

Jacksonville is certainly putting a spirit of youth in everything this April as BOTH Theatre groups are focusing on plays intended for children, by children:

Jacksonville Theatre Guild is producing Haphazardly Ever After, a new stage play full of laughs and mischief, by telling fractured fairy tales in a one-of-a-kind farce! The story is about a kindly king and queen who suddenly realize that they have raised four obnoxious, bratty children, that are anything but royal, and who won’t leave the nest! Finally, having reached the end of their royal rope, they turn to a Fairy Godmother for help and that’s when the chaos truly begins! The cast boasts a talented group of 33 young actors: Tori Fellhauer, Emily Cosgriff, Jonah Hutton, Gracie Jackson, Rayden Meyer, Sierra Brandt, Nick Hester, Grace Miller, Julian Evans, JD Lindley, Lauren Stidham, Abby Robinson, Autumn Meyer, Mick Polhemus, Dulci Polhemus, Jasmin Watson, Joseph Stephenson, Laura Cannon, Breckyn Lyons, Kalainee Teaney, Autumn Meyer, Alec Glisson, Emily Miner, Keegan Newman, Grace Newman, Macy Hanson, Madison Davis, Carson Cole, Audrey Zettler, Emily Evans, Marc Drake, Abby Thomas, Grace Smith, Anna Douglas, and the play is directed by Adam Power and Dave Shaffer. Performances for this production will be out at the Pavilion in Nichols Park on April 10, 11, 17 and 18 at 7:30 p.m. and on the 12th and 19th at 2:00. Tickets are $10 for adults and $5 for children 12 and under. To reserve a ticket, call the Theatre Guild office at 217-245-1402 or buy them online at jaxtg.weebly.com.

Over at Playhouse On The Square is the Beloved children’s classic, Charlotte’s Web. Wilbur, a runt pig, is saved from early death by young Fern Arable. After moving to a larger farm, Wilbur all but counts the days when he will be made into smoked bacon and ham. Wilbur gains the friendship of many animals, including a rat named Templeton and a spider named Charlotte. Charlotte’s devotion comes at quite a cost, as she seeks to save Wilbur from the butcher’s block. This cast boasts many newcomers as well as some veteran child actors: Conner Brannan, Quentin Bryson-Adams, Marcellus Speed, Hallie Mason, Jaxon Dion, Gabe Karr, Kaleah Gilbert, Gavin Cox, Katelyn Adams, Greta Bryson-Adams, McKenzie McGee, Steven Schilsky, Lucie Dion, Cooper Stowers, Amanda Cox-Otto, and the play is directed by Laurie McCoy and Kim Shafer. Performances are for one weekend only: Thursday April 2, Friday April 3 and Saturday April 4 at 7:30 p.m.

Playhouse continues April with two other special events. John O’Connor won raves and accolades last summer at New Salem’s Theatre In The Park for his performance of Abraham Lincoln in the play, Mr. Lincoln, directed by Carly Shank. Playhouse pays honor to Lincoln in recognition of the 150th Anniversary of his Assasination with two performances on Friday April 10 and Saturday April 11. On Thursday, April 16, Playhouse will host a night of Poetry at 7:30. $10 tickets for all of Playhouse’s Events are available at Our Town Books or The Soap Co. Coffee Shop or by calling 217-491-3977.