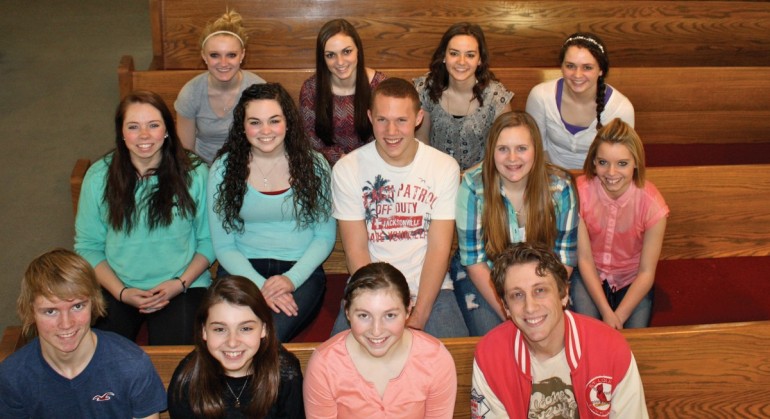 They’ll be uncovering the stories . . . the night the Routt player got angry and tackled the Triopia cheerleader, the day the pilot landed his plane on the highway in front of the high school, the Arenzville boys who put a chicken in their principal’s house when he was gone for the weekend, the Chapin teacher who threw the kid through the door, how Meredosia almost became Triopia, and the Concord girl who wouldn’t speak to boys from Arenzville until she married one.

The old saying goes something like this: “If you knew how either sausage or laws were made you wouldn’t want either one of them.” The same might be said of school districts, but in the case of Triopia the outcome has served well for nearly fifty years. On April 10 and 11 Ken Bradbury’s Lincoln Land Traveling Theatre will explore the history of how two feuding communities, Chapin and Arenzville, came together, took in Concord, and formed one of the area’s most well-known schools.

“Breakin’ Through and Bleedin’ Blue . . .the story of Triopia,” will be presented at the Arenzville Methodist Church at 7 p.m. on each even preceded by a dinner sponsored by the school’s student council at 6 p.m. A freewill donation will be accepted to benefit the student council. No reservations are required.

Ken Bradbury, the Lincoln Land theatre director, said, “We interviewed around 70 folks who told us stories of how the district was formed. My students were fascinated to learn that Arenzville and Chapin were fierce rivals until they consolidated with Concord to form Triopia.” Three of the actors have grandparents who met each other as a result of the joining of the schools. Elisabeth Werries said, “I had no idea that’s how Grandpa and Grandma met.” Among the stories told in the play is the tale of how Elisabeth’s grandparents met on a fan bus on the way to a ballgame. “Grandpa went home and told his brother that he’d met this really neat girl,” said Elisabeth. “So he moved his seat closer to her in study hall and I guess that’s how it started.”

Along with the history of Triopia’s formation, the script is comprised of stories told by the graduates over the years. . . .the teacher who would walk down the hallways tossing imaginary hand grenades into the classrooms, the day the school was shut down because President Reagan needed to land his helicopter on the football field, the boy who kept a pig in his locker all day, the football coach who was known for breaking his clipboard over the helmets of his players . . . all combine for an entertaining evening of theatre.