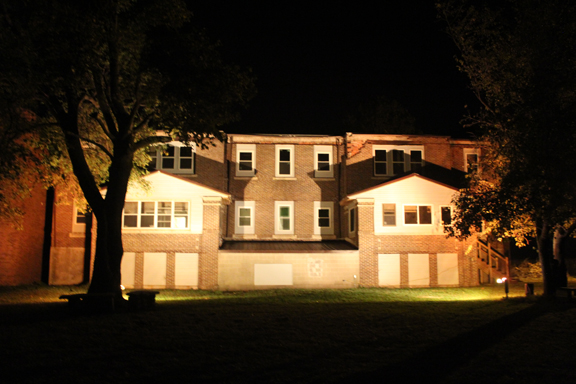 For Jacksonville area fans of paranormal reality shows like Ghost Hunters and Ghost Adventurers, the intriguing Ashmore Estates is probably a well-known property. Located just a few miles east of Charleston, Illinois, the Ashmore Estates property has a documented history of supernatural occurrences.

The property’s background has all the ingredients for a campfire story. Its origin dates back to pre-Civil War, and the property, initially a “poor farm”, (where people were sentenced to live, and were called inmates) to later being a private psychiatric hospital, and a home for the developmentally disabled. The nearby cemetery is a nice haunted house touch too. During an extended period beginning in the 1980’s, it became the place teenagers explored and partied in, and the building suffered repeated acts of vandalism. Ashmore Estates was purchased in the late 90’s to be renovated into a private residence, but that never came to fruition. In 2006, the property again changed hands, with the owners offering flashlight tours and overnight stays to help alleviate renovation costs. The all night events were called “A Night of Insanity”, and featured films and guest speakers.

Ashmore Estates is currently owned by Robbin and Norma Terry, who live in the Auburn area. During the sale of some haunted house props, his customer made Terry aware of his plan to sell Ashmore Estates. Intrigued with the building from a prior visit, Terry fell in love with the place during his flashlight inspection of the property’s structure. Despite the darkness, a seriously damaged roof, and a building full of junk, he was drawn to the feel of the place. He wanted to own it, but also wanted to restore it to its former glory.

“It just had that feeling when I was walking through that people were reaching out and saying help our building,” Terry said. “The spirits in the building.”

Terry routinely makes the two hour drive to the property as they continue to renovate and welcome paranormal investigators and those interested in the supernatural to experience the building. He was kind enough to meet me at Ashmore Estates for a sunset tour prior to my after dark experience.

Equally passionate and gracious about Ashmore’s history and future, Mr. Terry gave me the “A” tour, and the building itself was an unexpected blend of old and new. The interior was much cleaner than I expected, with the majority of the rooms empty and bare walled. There were few cobwebs, and the extensive cleaning of the building had taken the edge off the initial creep factor, which I had no problem with. 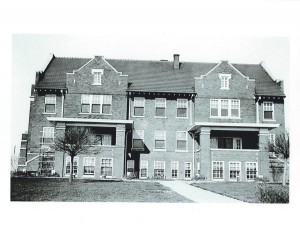 Terry is very protective of the building’s legend. When talk of demonic activity surfaced on a Facebook page prior to a possible two night investigation, he immediately stepped to Ashmore’s defense.

“I sent them an email and said that if you guys want to keep focusing on stuff like that, I don’t want anything to do with you.” A person appearing on an episode of Ghost Adventurers had mentioned he thought there was a demon in the building, opening the door to unwanted conjecture. Mr. Terry isn’t interested in that type of misinformation being spread.

But when it comes to paranormal activity, Ashmore Estates has displayed its share. Leading up to my special night, I began to wonder more and more about the reality of the place. Would I be able to accept anything that happened as real or would I write it off as some cheap parlor trick?

Michele Watson-Baker, Ashmore’s current historian, has been curious about the paranormal her whole life, and has had several unexplained experiences throughout her childhood and teen years. She was happy to share about her experiences at Ashmore.

“I’m the sort of girl who likes answers, so I search for them.”

She has seen and heard the impossible during her numerous trips.

“At one point I spent a lot of time in the building alone, packing or cleaning. One day, I’d just said goodbye to the then owner, and watched them pull out of the drive. I walked into the building, locking it behind me. I set off to do my tasks, and as I walked into a room I heard ‘Well, hi there!’ As I was on a mission to get something done I simply said, ‘Hey! How are ya?’ and kept moving, until I realized, I’m the only one in the building.”

“On another occasion, a group of us were investigating…It was common at that time to be able to see shadows walk into the room and disappear. One of the shadows turned and looked at us. We could see its eyes, and it ran towards us, disappearing just before it would have hit us. That’s one of those instances I was scared, just for a moment. I’ll never forget it.”

“Michele and I were alone in an empty room, with several feet between each of us and the wall. I was on a high table and couldn’t get down or reach my sister. Out of the blue, Michele said, ‘Hey, stop pulling on my shirt, it’s getting annoying’. There was no way I could reach her. The rest of that evening I watched her shirt get tugged, like a small kid tugging on their mom’s shirt for attention.”

Elbert Silotto is a “sensitive”. Since the age of 7 he could feel and sometimes see things, but was not always able to really understand…He can pick up on the emotions of a spirit and at times sense them as good or evil. Mr. Silotto has had his own unique experiences in Ashmore.

“One that really sticks out is when I got knocked across the broiler room. It was a spirit that was being aggressive, and so I got aggressive back and he knocked me across the room. It took all my energy out of me and I had to stay down for a bit. I could not get back up.”

One of the most intriguing things about Ashmore Estates is the consensus from everyone I contacted about feeling at home when they’re in the building, which is not a typical reaction one expects of a haunted house. The feeling might best be summed up by Brian Murray, co-founder of Riverbend Paranormal, based in Alton, Il. When asked if haunted was the best way to describe Ashmore, his response was

“I’d say a warm haunt. I feel completely drawn to Ashmore. I feel the residents there want to tell us a story. A story about the past and the future.”

And finally, the time came for me to explore and discover Ashmore Estates for myself.

Vince Churchill is a novelist, screenwriter, and columnist. He invites you to visit his website vincechurchill.com to contact him and discover all his published works.

View all articles by Vince Churchill