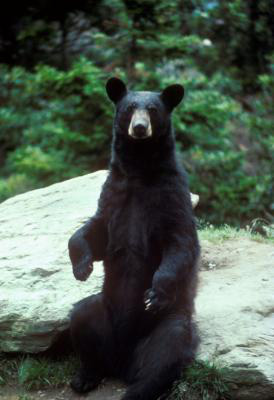 The following material is reprinted from the U of I Extension website Living with Wildlife in Illinois at http://web.extension.illinois.edu/wildlife.

Prior to European settlement, black bears, gray wolves, and mountain lions were an important part of the Midwestern landscape. Today, while a few occasionally move through the state, there are no breeding populations of bears, wolves, or mountain lions (also known as cougars) left in Illinois. What does the future hold? Will these large carnivores make a successful comeback in Illinois? And what will that mean for the people, other animals, and plants that now call Illinois home?

SB3049, which took effect January 1, 2015, amends the Illinois Wildlife Code by adding black bears, mountain lions, and gray wolves to the list of protected species. Gray wolves are listed as a State Threatened Species and as Federally Endangered by the U.S. Fish and Wildlife Service throughout Illinois.

In the United States, populations of bears, wolves, and mountain lions are growing in various areas of the country, but the amount of suitable habitat available is not.

That sometimes pushes young animals long distances in search of a new place to set up a territory.

Black bears are the most widespread of the three large mammals. Currently, there are black bear populations in 39 US states. Populations of gray wolves experienced the largest declines of the three species and survived only in Minnesota and Isle Royale. Wolves have recolonized portions of Wisconsin and Michigan and have recolonized and/or been reintroduced to western states. Established breeding populations of mountain lions occur in the western US, but not in the Midwest. Mountain lions are slowly making their way east, closing in on the Midwestern states.

Research conducted at Southern Illinois University indicates that only 13 to 14 percent of Illinois contains habitat that would support a population of wolves. The Shawnee Forest in southern Illinois, habitat along the Illinois River in west-central Illinois, and a small swatch of land in northwest Illinois are the most likely areas. Biologists think that bears may be more successful in recolonizing the Midwest than cougars or wolves because they are already more widespread and they do not compete as directly for prey as mountain lions and wolves do. Public acceptance of bears is also typically higher.

The Illinois Department of Natural Resources is interested in any information or possible sightings of bear, wolves, or mountain lions in Illinois. Please include specific location information, and if available, send photos or track castings. When taking images of tracks, please include a ruler or an object of known size so the size of the track can be determined. Also take wider angle images of the tracks that include identifiable objects on the landscape for site confirmation purposes. The information may be sent to: Doug Dufford, Illinois Department of Natural Resources, E-mail: doug.dufford@illinois.gov

View all articles by Duane Friend