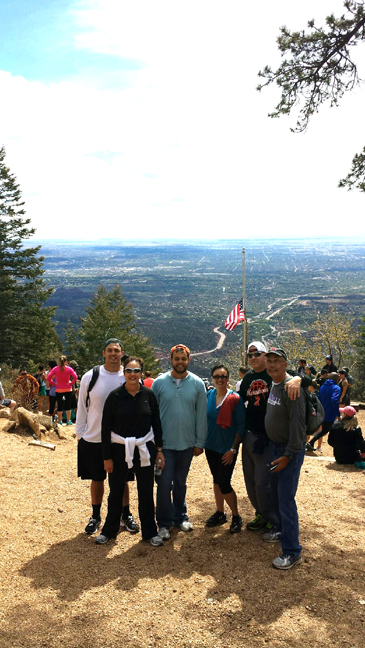 This past Memorial Day, over the weekend of May 25, Kevin Duesterhaus and his sister Debbie set out for Manitou Springs, Colorado, home of the Manitou Incline – one of the steepest and most popular hiking trails in the Centennial State. While Kevin traveled from his home in Chambersburg, Illinois, and Debbie and her family from Oklahoma, their destination marked the home of their brother Kent, who had sadly passed away last fall at the age of 44. Back in 2012, Kent had started a tradition of climbing the Manitou Incline, all 2,744 steps, in memory of their father, Tom. And with Kent’s passing, Kevin and Debbie were there to carry that tradition on.

“[Kent] had done it three years and the last two years he did it on Father’s Day, and his plan was to climb it every Father’s Day,” Kevin Duesterhaus said of how the tradition got started. “Kent was more of a health nut than me – he ran, hiked, climbed, he worked out all the time and so this was something he had been doing in remembrance of our father.”

Having been constructed over one hundred years ago, the Manitou Incline operated as cable railway to access water at the top of Pikes Peak until 1990, when a rock slide washed out the rail bed and the Pikes Peak Cog Railway decided not to repair the tracks. After the railway closure in 1990, the Manitou Incline has become an increasingly popular hiking destination, even drawing a number of Olympians and other professional athletes. Starting at 6,600 feet above sea level, hikers climb 2,000 feet in just over three-quarters of a mile, with grades as steep as 68 percent in various places.

“It’s pretty intense, probably one of the toughest physical things I’ve ever done,” Duesterhaus said of the Incline, “I joked with my sister while we were doing it, saying ‘Man, if we weren’t doing this for [Kent and Dad] I don’t know if I’d be able to make it up all the way’. It was very tough physically but also very rewarding once you reached the top. ” 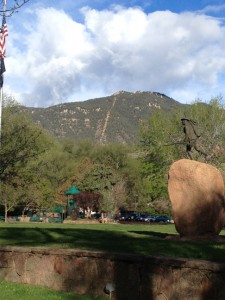 As a Veteran of the US Army, Kent Duesterhaus had been stationed in Colorado since the late 1980s. During his time there, Kent lived with his girlfriend Janet and his son Austin, both whom he had climbed the Incline with. And as Kevin explained, the climb was not only about memorializing his brother and father, but also about the entire Duesterhaus family being there for one another, especially for his nephew Austin, who unfortunately was unable to participate in the climb due to sickness.

“We’re going to try and do the climb every year,” Duesterhaus said. “I definitely want to do it with my nephew, especially since I’m his only male relative left. So I want to stay close with him, be involved with his life and kind of look after him cause I know my brother would do the same for me.”

“[The climb] was tough for me but I can do it, so I want to do it as many times as I can before I’m unable to. And I definitely want to take my own kids out there and experience it with them, that way when I’m gone they can have something to remember me by too.”

Although the Duesterhauses are somewhat dispersed throughout the country – Kevin living in Chambersburg, Debbie in Oklahoma, and their parents in Jacksonville – they will always have the Manitou Incline. Started by their brother as a way to remember their father, the Duesterhaus family will continue their climb for years to come, with each step (all 2,744 of them) reminding them of where they came from.