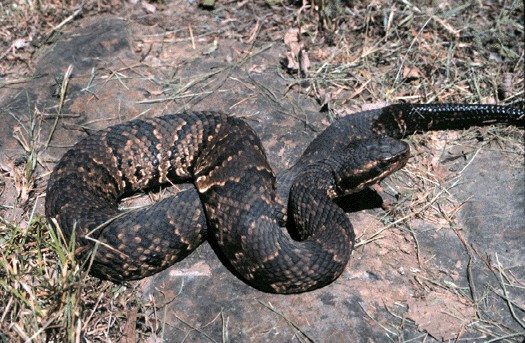 Many people think that snakes are scary, dangerous, slimy and all around unnecessary. But that is not the case. In fact, except for the first description, the other descriptions are completely false. What one person finds scary is just that. But snakes are not slimy; they are no more dangerous than any other animal; and they serve a very important role in the ecosystems in which they are found.

In Illinois there are only four species of venomous snakes. Those are the copperhead (Agkistrodon contortix), cottonmouth or water moccasin (Agkistrodon piscivorus), timber rattlesnake (Crotalus horridus) and eastern massasauga (Sistrurus catenatus). In each case, these snakes have very specific habitats. As the habitat that they require is destroyed, they become less common throughout the state. In recent years, these snakes have not been confirmed in Fulton, Mason, Peoria and Tazewell counties. Copperheads can be found in the southern third of the state, south of Illinois Route 16 (south of Springfield). Cottonmouths are found in swamps and wet bottomlands generally south of Illinois Route 13 (south of St. Louis). Timber rattlesnakes are typically only found in the southern quarter of the state (south of I-64) and prefer heavy timber with rock outcropping and bluffs. Eastern massasaugas can be found scattered throughout the state and are very habitat specific. They are found in prairie wetlands and river flood plains. Every year there is fewer habitats for them, and they are only found in very specific locations in Madison, Clinton, Piatt, Knox, Warren, Will, Cook and Lake counties.

Snakes are not slimy. If you are given the chance to touch a snake in an education center, you should do so. Otherwise, you will just have to believe that I am telling the truth.

Snakes are anything but unnecessary. In fact, you should ask yourself which you like more – snakes or mice, rats and other rodents. These are the primary food for snakes, and they do a great job of controlling rodent populations around your house, in your barns, or in your garden.  They serve to benefit you in other ways, as well. In 2013, a research team presented their findings to the Ecological Society of America showing that the timber rattlesnake may reduce the incidence of Lyme disease. The team found that in areas where timber rattlesnake populations are in decline because of habitat loss and other threats, Lyme disease is on the increase. This can be extended to other species as well, since many snake species have similar prey species. Snakes also keep many rodent species out of your house. Let’s be honest, no one wants rodents in the house (unless they are your pet).