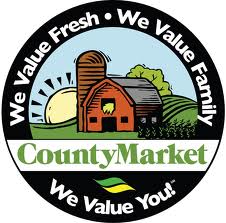 Most every year since the early 2000’s, the City of Jacksonville has anticipated the appearance of the “World’s Largest Touring Grill,” the Johnsonville Big Taste Grill™.

The whopping 65-foot long, customized semi-tractor and trailer will roll into town and park at County Market to fire up a local fundraiser on Wednesday, July 30. The 2014 cookout is sponsored by County Market, Johnsonville Sausage, and Kiwanis of Jacksonville.

County Market has simultaneously backed the event and also supported local service clubs and groups by doing their best to rotate between major service clubs or groups that are involved.

All the monies raised will go to the service group chosen – this year, the Kiwanis.  Tom Glossop, Manager of County Market, noted that the Big Taste Grill™ has come back almost annually to Jacksonville during its 9-month tour of the country to benefit non-profit organizations, stopping in our small town venue though it generally heads to larger events, such as state fairs, Nascar races or huge food shows; they return to Jacksonville because our community has supported it very well.

Just as Johnsonville does, Glossop explains that County Market likewise has “always used the event as a fundraiser. We always try to give back to the community. County Market will receive nothing from the fundraiser.” Moreover, the assorted bun, soda, and potato chip vendors lessen their product pricing for the event, while the City of Jacksonville donates trash cans and picnic tables for use during the event, allowing the profit to be put toward Kiwanis’ new big toy that plans to be erected this August in Community Park.

Kiwanis volunteers will work the grills at the tasty tailgate fundraiser, serving up from 11a.m. – 6p.m. in the County Market parking lot. The truck has the cooking capacity to yield 750 brats at once, if need, as local service-minded people will brown up the brats offered in a $5 brat/soda/package of chips combo. For the carnivores, you can nab an extra Johnsonville brat for an additional $3. A lot of work and volunteerism goes into this fundraiser; it kicks off with 7a.m. setup and will need a minimum of 24 volunteers at any one time to keep the fundraiser running smoothly and ensure intentions for a prosperous day that will add funds for the Kiwanis big toy project. Glossop estimated that a good year for the fundraiser will collect in excess of $8,000 net profit and that over the years, “We’ve raised close to $100,000 for the community by sponsoring these events.”

The public is invited to come out to County Market on Wednesday, July 30, to experience what Johnsonville calls “not your average backyard BBQ.” Plus, with a truck that big, painted with ‘glowing’ charcoal decals to draw you in, the goal is for a fundraiser success comparably large in profit, which can assist Kiwanis in the purchase of the new, safe big toy for the entire community to use. Come out and have a brat – or two!