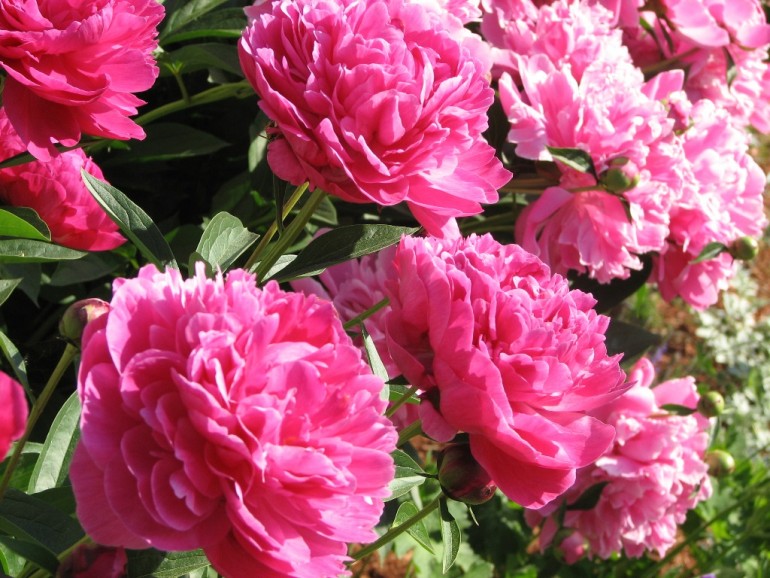 Herbaceous peonies are a common site in many gardens and some of the most beautiful flowers you will find. They belong to the genus Paeonia which is native to Asia, Europe and Western North America. They have been cultivated in Asia for more than 1,500 years. These cultivated peonies were brought to Europe and later the United States around 1800. In addition to their beauty, they can be quite long lived. Many plants have been growing and flowering for more than 50 years.

Depending on the species and cultivar, peonies will bloom from late spring to early summer. Peonies were traditionally white, blush, pink and red in color. However due to breeding, coral, yellow and patterned peonies can now be found. In addition to a wide variety of colors, blooms also come in a variety of different shapes. The American Peony Society recognizes six different types of flowers: single, Japanese, anemone, semi-double, bomb, and double.

If your peonies aren’t producing buds and blooming, there are several different things that could be causing this.

Despite the old wives tale, peonies do not need ants to help them flower. Ants are commonly seen on the buds of peonies and many think that they help pry the flower buds open. Peonies have glands called extrafloral nectaries on their sepals and floral bracts that release nectar. These are different than the nectaries that are inside of the flower that produce nectar to encourage pollination and provide food for hummingbirds and insects. It is believed that plants have these extrafloral nectaries to attract beneficial insects. The beneficials (such as lady bugs and ants) will feed on the nectar and protect the plant from pests. To get rid of the ants on the flowers before bringing them inside, stick the flowers in some water and swish them around. This should remove most of the ants. .

Just like roses and other flowers, it’s a good idea to remove flower heads and/or seed pods when plants are done blooming. This will help the appearance of the plants and also prevent the plant from sending energy in to producing seeds.

Follow these tips and your peonies will be blooming for years to come.