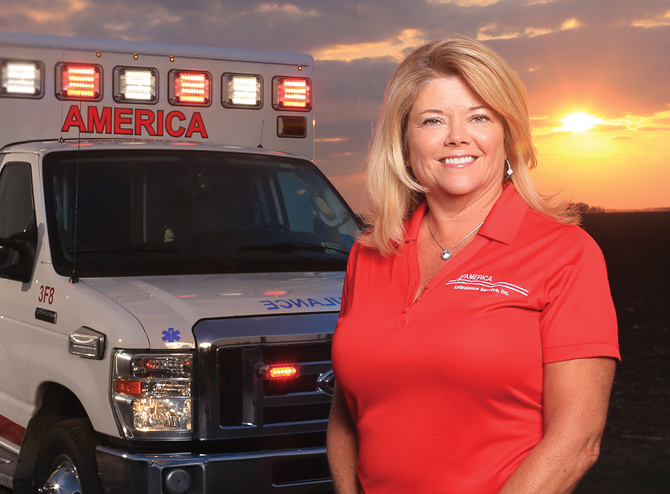 “Reprinted with permission from the May 2015 issue of Springfield Business Journal.”

Susan Zappa has worked in nursing, for the state and with ExxonMobil. “I always wondered why I jumped around,” she said. Her prior jobs gave her a well-rounded education and prepared her to do what she was meant to do.

She purchased America Ambulance Service from Terry and Faye Kirk in 2008. The Kirks started the company in 1967. “I knew the Kirks for years,” said Zappa. “Terry would often say ‘Why don’t you buy the business?’”

Being a woman has its benefits. “I have gotten state and federal contracts,” said Zappa, who added men are often not thrilled to see women in this male-dominated industry. Strong women are looked at as “bitches” while strong men are seen as tough.

“It takes a long time to earn their respect, if you ever do,” said Zappa. “Women have to work twice as hard to get that respect.”

Zappa grew up in Cincinnati, Ohio, where her parents owned several businesses. Her parents taught her to respect people and to treat everybody fairly. “I was always at their businesses,” she said. “My mom would take me everywhere.

“I had good female role models,” continued Zappa, who credits her mother, her maternal aunts and her grandmother with teaching her to work hard to be successful. “I had a lot of good female influences in my life.”

When Zappa started college at Auburn University in Alabama, she majored in accounting. “I did it for my mom,” she said. Her eventual switch to a nursing major came about because she liked people more than she liked numbers on a piece of paper. “I like helping people,” she says.

Her mother was perplexed but supportive when Zappa told her she was switching her major to nursing. “She was a great mother,” said Zappa. “I was lucky to learn a lot from her.”

Family is important to her, “My most important role is being a mother to my four children,” said Zappa. “I’m very fortunate to have the family that I have. It’s not often a woman can have a rewarding career and a beautiful family you admire.” The other stuff is immaterial. “My family’s health and happiness are more important.”

After her sons were in school, she was ready to re-enter the workforce. She’s glad she purchased the business. “I enjoy it,” said Zappa. “Owning a business has its ups and downs.” When she purchased it, there were 20 to 30 employees, six ambulances and one location. Today she has 65 to 70 employees and three locations in Springfield and Jacksonville. Her medics are currently undergoing training in critical care and will be the only ones offering this service.

Before she bought the business, she and Terry often talked, and he always told her you needed someone you trust to have your back. When she purchased it, it was only natural that she invited her best friend, Carla Berg, to join her. You can’t be a success without people around you who support you and what you do.

“I’m fortunate,” said Zappa. She was overwhelmed when she learned she was being honored as a Woman of Influence.  She doesn’t like to be in the spotlight. “I felt like crying. I was very humbled,” she added.

She encourages women to not be afraid to take risks. “If you believe in it, go for it,” said Zappa. “Don’t hold back.”