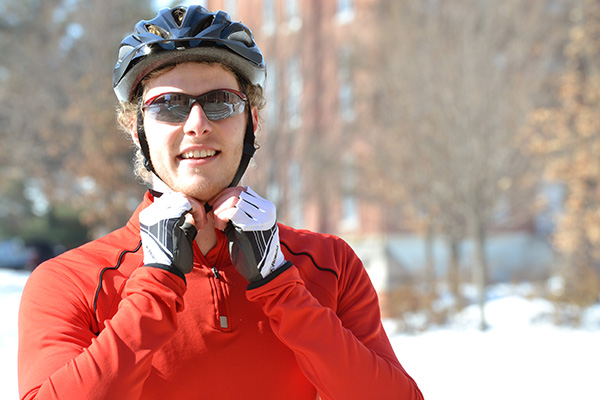 Noah Rieger, an Illinois College student from Germany, has big plans for this summer when the school year wraps up. He’ll be bicycling 4,256 miles from Charleston, South Carolina to Santa Cruz, California over 82 days for Bike and Build, a nonprofit organization that hosts cross-country cycling journeys to benefit housing projects with Habitat for Humanity.

When Rieger came to Illinois College to study abroad, he also signed on to head up the German House and German Cultural Program on campus, allowing students to learn about the culture of his home country. After hearing about Bike and Build, he was set on the idea.  “My American friend told me about Bike and Build and I was immediately hooked,” Rieger says. “I always told myself that if I ever spent a long period of time in the States I would sign up for this ride.”

Beginning on the 22nd of May, a group of 25-30 cyclists will head out on their journey, which wraps up in August. The group will stay in tents and community centers along the 15 states they’ll be crossing. This is the 10th season of the program, which has donated over $4.5 million to housing projects since its inception.

With a background in Germany doing carpentry work, Rieger’s skills will be put to use along the bike trek—the group will make stops along the way to help work on housing projects as they cross the nation. In Pueblo, Colorado, the team will construct an entire home before moving along.

In regard to the distance, Rieger has never biked this long of a distance before, but has spent much of the winter on the stationary bike training and is ready to get outdoors in the warmer weather. The terrain they’ll be crossing ranges from plains to the Rocky Mountains, so conditioning is key. “I’m interested to see how my body responds to being so tired, but I feel confident,” he said. “Not only that, but how I’ll respond to the social aspect of being in such close quarters with 30 strangers for two and a half months.”

In order to reach his fundraising goal, Rieger needs to raise $4,500 that will directly benefit the cause—and he’s at the $2,700 mark. If the fundraising goal isn’t met, he won’t be able to participate. So far, he’s seen support from both friends in Germany and the US. “I’m so looking forward to this adventure—it will be the perfect closure to my awesome time spent this past year at Illinois College,” he said. To contribute to his fund before the mid-April deadline, visit www.bikeandbuild.org/rider/7228.