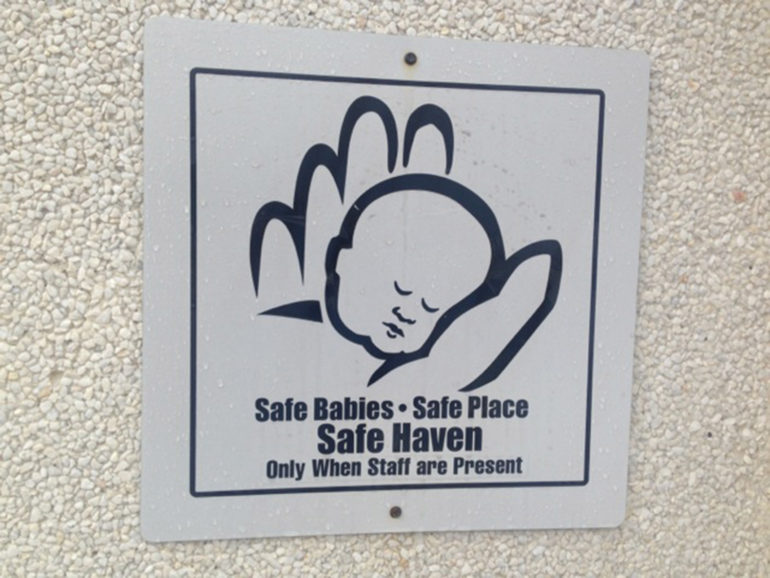 The “Safe Babies • Safe Place • Safe Haven” can be seen by the main entrance of the Jacksonville Police department.}

In the late 1990’s the United States experienced a large surge in infant abandonments, resulting in the death of many babies.  In order to combat this epidemic, Texas created the Baby Moses Law in 1999. The Baby Moses Law gives parents, who are unable to care for their child, a safe and legal choice to leave their less than 30 day old infant with an employee at a designated safe place, such as a hospital, fire station, or emergency medical services station.

Despite Safe Haven Laws being in effect nationwide, many women, who find themselves in unfortunate circumstances, remain unaware of these laws and choose to abandon their infants. On Saturday, August 30th, a baby boy was found inside of a dumpster located on Jacksonville’s West Lafayette Avenue. The dumpster was less two blocks away from Jacksonville’s Police Station; a safe haven location.

When a parent chooses to leave their infant at a safe haven location, they are guaranteed the right to privacy. The Illinois law ensures that as long as no harm has been done to the child, babies can be handed over to personnel at designated safe haven locations without any questions being asked. Parents will not be asked their name, but they may voluntarily provide anonymous medical information so that the child will grow up with a medical history. Parents may also be offered medical care or counseling services, but are not required to accept these services, and may simply walk away.

Once the parent leaves the child at a safe haven location, the child will be taken to the nearest hospital, if they are not already at one, and receive a full medical examination. The Department of Child and Family Services (DCFS) will then be notified about the situation. Next, DCFS will contact a licensed adoption agency to start the adoption process. If a parent changes there mind, under the Illinois Abandoned Newborn Infant Protection Act, they are allowed to reclaim their infant, subject to counseling and an investigation by DCFS, up to 60 days after the date of abandonment.

One Illinois grassroots organization has been working tirelessly for more than ten years to promote awareness of the Illinois Abandoned Newborn Infant Protection Act. The Save Abandoned Babies Foundation’s sole mission is to save the lives of newborns that might otherwise be abandoned unsafely in Illinois. The group focuses on informing girls and women that this safe option exists. More information about the Illinois Abandoned Newborn Infant Protection Act and Save Abandoned Babies Foundation can be found on the website www.saveabandonedbabies.org.