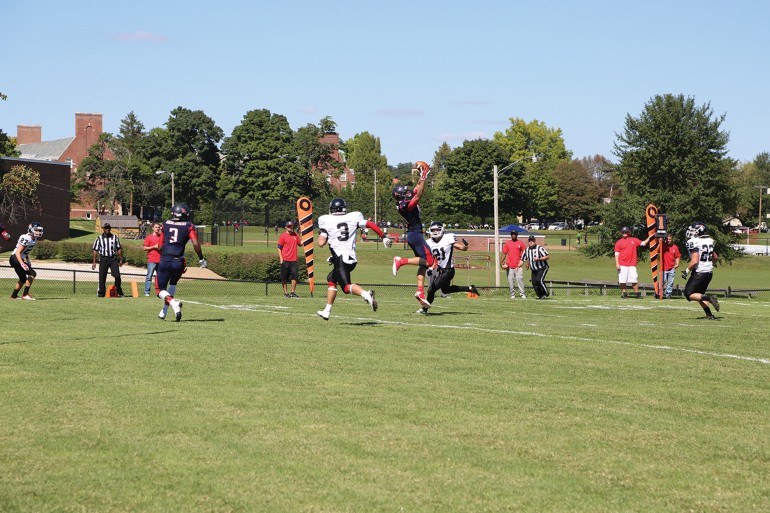 {CAPTION} Photo/Special to The Source Newspaper

MacMurray college would like to recognize running back Patrick Hall and women’s soccer player Tiffany Hazelwonder as the Highlander student-athletes of the week for the week of September 15.

MacMurray College Athletic Department would like to recognize running back Patrick Hall and women’s soccer player Tiffany Hazelwonder as the Highlander student-athletes of the week for the week of September 15.

Hall had 19 carries and 150 net yards against Martin Luther College.  He also had three rushing touchdowns.

“Pat had a tremendous game Saturday.”  “150 yards rushing is great but he also was critical in run blocking and pass protection today.”  “Pat’s success is a credit to the blocking of the offensive line who has a unit had their best day blocking since I’ve been here,” said head football coach, Chris Douglas.

The female student-athlete of the week was Tiffany Hazelwonder, who recorded a hat-trick in the Highlanders 4-0 win against Rockford University.

“Tiffany Hazelwonder has performed at a consistently high level throughout the season. Tiffany certainly deserves the recognition for her leadership in effort and attitude. Tiffany, however, is the kind of young lady who would give credit to her team in helping her perform consistently well,” said head coach Bill Koeppen.

Volleyball: MacMurray College volleyball picked up a pair of SLIAC conference wins Saturday at their Quint matches. In the first match MacMurray picked up a win in three straight over Eureka. In the win the Highlanders were lead by Aly Ferrari with 8 kills and 14 digs. Offensively Breanne Pelker also contributed 9 kills.

In the second match MacMurray took on Blackburn and also won in three straight by scores of 25-15,25-22,25-11. In the win the Highlanders were lead by Alexa Boyer with 14 assists 3 aces and 2 kills. Morgan Hauser had 7 kills to pace MacMurray.

The wins put the Highlanders at 6-5 overall, 3-2 in the SLIAC conference and they are currently 3-0 at home.

Football: The MacMurray College football team suffered a heartbreaking 27-21 to Westminster College Saturday at Freesen Field.  The Highlanders had possession in Blue Jay territory in the closing minutes, but penalties and an interception allowed Westminster to hold on for the road win.

Coach Chris Douglas’ club got off to a quick 7-0 lead after taking the opening kick-off and driving 80 yards on ten plays for a touchdown.  Coy Dorothy’s 27-yard pass to Jorian Clemons capped off the drive.

The Highlanders fall to 1-2 overall and 1-1 in UMAC league play; while Westminster improves to 2-1 overall and 2-0 in conference play.

Soccer: The MacMurray College men’s soccer team lost a 1-0 decision Saturday afternoon at Robert Morris University-Springfield.  The loss was the sixth straight for the Highlanders, who have also now been shutout in three straight matches.

Coach Bill Koeppen’s club outshot the host Eagles but failed to put a shot in the net.  Tyler Marfo made four saves in goal for MacMurray (1-7). Men’s and Women’s Golf: Check back next week for results on the MacMurray College Invite.

Men’s and Women’s Golf Invite at the Links