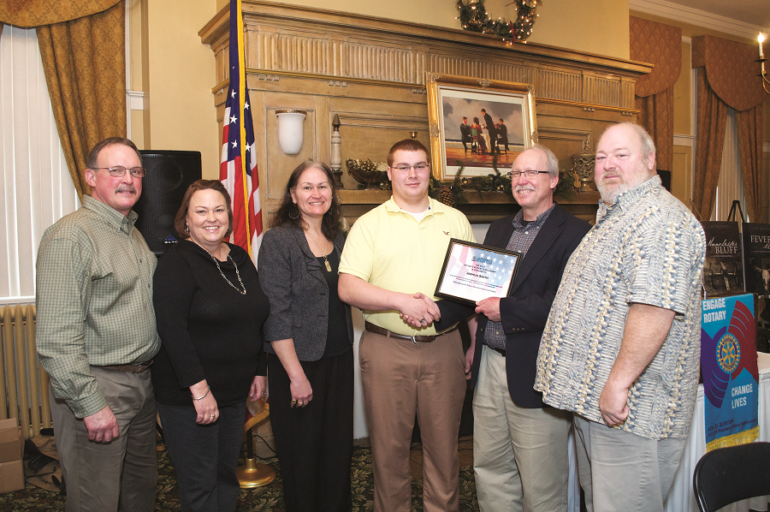 According to Club President Ryan Byers, “The scholarship was established within the Jacksonville Rotary Club Foundation to honor the memory of Staff Sergeant Matthew W. Weikert, who was mortally wounded in 2010 while serving in Afghanistan. Weikert, who was a member of the Jacksonville High School Class of 2000, joined the U.S. Marine Corps in August of 2001 serving three tours in Iraq over four years. He later joined the U.S. Army serving with the 101st Airborne completing a tour in Iraq and was deployed in Afghanistan at the time of his death.”  Byers continued, “Matt Weikert personified the characteristics that Rotary values.  He was known for his leadership and his attitude of service above self.”

Scholarship Committee Chair Stephen Holt said, “Joshua Smith is an outstanding young man who represents the qualities of leadership and service that will appropriately honor Sgt. Weikert’s memory. Joshua has been involved in a large number of activities during high school, including Future Farmers of America, football and wrestling, Role Models Encouraging Freshmen, Pony/Colt Baseball, and Prairie Land Heritage Museum, and he has a job at Steak ‘n Shake. Joshua plans to study criminal justice at Lincoln Land Community College. He has expressed an interest in the military and has a goal of running an automotive repair shop.”

Holt said, “This scholarship is open to JHS seniors or alumni – including those who may be returning to school after years in the work force – who are interested in pursuing education or training through a community college or vocational program.  Applicants must exhibit leadership qualities and demonstrate a record of community service.  The one-time scholarship award is paid directly to the educational institution selected by the scholarship recipient. The scholarship can be used for tuition, lab fees, books, or any other costs directly associated with the recipient’s education.”

An anonymous donor has provided funding to offer the Sgt. Matt Weikert scholarship for the next four years. The Jacksonville Rotary Club Foundation will accept tax-deductible donations from anyone interested in extending the scholarship’s availability.

More information about this topic can be obtained by contacting Rotary Club President Ryan Byers at 217-649-2012.

gratitude toward Dick Weickert by hugging after Smith was presented his award.