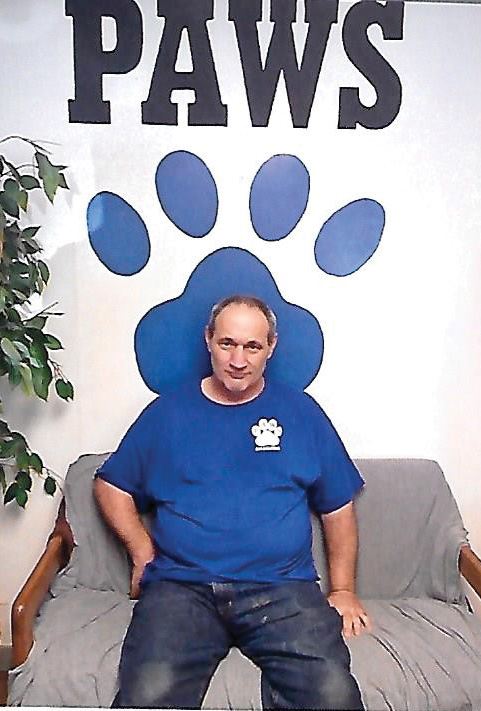 If you ask Jacksonville native Ronnie Hatcher what his favorite part of volunteering at PAWS is, his answer will be, “all of it!” Ronnie has been volunteering at PAWS for almost a year. You used to only be able to find him there on Tuesdays and Fridays, but he told Lisa Jackson at PAWS that if he had a ride there, he would like to be there five days a week. Over the summer, Lisa made that possible by buying him a bus pass.

When asked why he wanted to volunteer at PAWS, he said, “so I have something to do.” He is so loved there that he once had a dog named after him. The dog came in with the name Brownie, but they changed it to Ronnie. His favorite dogs there include Crayton, the Coon Hound; Finny, the brown and white Chihuahua; Thrusten, the Labradoodle; Jersey, the white Brindle American Bulldog, and Flo and Flora, the Terriers. The one part of the building you most likely WON’T find Ronnie…is in the cat house. He’s not a big fan of cats! His favorite job there, and easiest, is mopping. According to Lisa, he’s the mopping machine. He also enjoys meeting new people. Like most people, there is always going to be a part of the job that you don’t like, and that part for Ronnie is scooping the poop. I can’t say that I blame him! The one talent he says he has is the ability to calm the dogs down when nobody else can.

From what I gather, Ronnie is a bit spoiled by everybody at the shelter. His favorite foods include homemade apple pie (he doesn’t care who makes it, as long as it’s homemade) and oatmeal cookies – no raisins! The cookies are made by another volunteer at the shelter, Wendy. Also, on Fridays when Ronnie is there for lunch, they usually order out. He says he doesn’t have a favorite restaurant, but when I asked him if he had a nickname, he didn’t hesitate to tell me that he’s sometimes called “Big Mac.” When I asked him how he got that name, he replied, “no reason really, but maybe it’s because I eat too many Big Macs!”

He tells me that the one thing about him that most people don’t know is that he doesn’t like many sweets and definitely doesn’t like chocolate, but if you baked him a chocolate cake with white icing, he’d love you forever! Besides volunteering at PAWS, he also does some auctioning once a month in Patterson, IL.  Many years ago, he worked at a recycling facility in White Hall, where he worked for 18 years.

After Ronnie got done telling me a little about himself, Lisa  stepped in. When she spoke of Ronnie, there was sincere appreciation for him. “We are very fortunate to have him here. He’s a darn good worker. Anything we ask him to do, he does it without ever complaining!” She also noted that he’s a bit ornery, but he’s a good guy!

View all articles by Robyn Mckinley