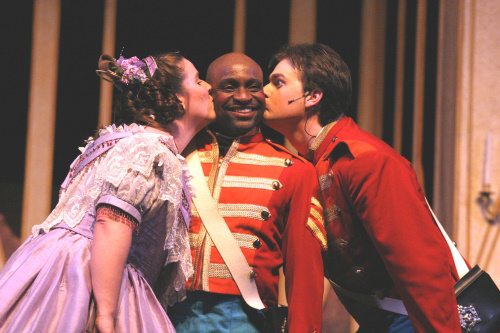 April showers are said to bring May flowers and that must mean that we will have a plentiful flowering garden of artistic flora this May, because we are certainly being showered with an abundance of activities this month.

Illinois College McGaw Fine Arts Series closes out its “Made In America” theme with two vocal performances. On April 2, at 7:30 p.m., Frank Ward (bass-baritone), a versatile singer and sought-after performer who has appeared in professional productions as diverse as “La Bohème,” “Showboat,” “Treemonisha” and “Mikado,” will perform. He made his European debut singing the role of Don Bartolo in “Rossini’s Barber Of Seville” in Rome, Italy with Opera Estate. A native of Richmond, Va., Ward holds degrees from Morehouse College and the University of Michigan. Critics have praised Ward’s “careful attention to diction” and his “great vocal agility and treatment of ornamentation,” while Pulitzer Prize-winning poet W.D. Snodgrass wrote: “Frank Ward truly knows how to present a song.” Come and enjoy a specially prepared and exciting recital which Sarah Mahler Kraaz of Ripon College proclaimed, “I have never experienced such intensity with a vocal program before; Ward really made the ‘spirit’ of the spirituals come alive.” On Sunday, April 24, at 3 p.m., the American Boychoir will take the stage to enchant the Jacksonville audiences again. For over 75 years, The American Boychoir has long been recognized as one of the finest musical ensembles in the country. Capitalizing on its trademark blend of musical sophistication, spirited presentation and ensemble virtuosity, The Boychoir performs regularly with world-class ensembles, including The New York Philharmonic, The Philadelphia Orchestra and The Boston Symphony, and is often featured with such illustrious conductors as James Levine, Charles Dutoit and Alan Gilbert. As always, all concerts are held at Illinois College’s Rammelkamp Chapel. Tickets will be available at the door.

Back at Rammelkamp on April 30, at 7:30 p.m., the Jacksonville Symphony and Chorale, along with the voices from Illinois College Choir, MacMurray College Choir, Williamsville High School and Laurel United Methodist Choir, will bring Maestro Garrett Allman’s 35th season to a glorious end with one of the most beloved choral-orchestral works, Faure’s “Requiem.” You will not want to miss this masterpiece of a finale. Tickets may be purchased at the door.

Illinois College closes out the 2015-2016 school year with a classic, as well, “Playboy of the Western World,” by John M. Synge. “Playboy” is an Irish play in which a village loon splits his father’s head open with a spade, runs away, tells people he “killed his da” and is promptly installed as a hero by excitable women and drunken men. Their vision of him, however, soon changes as the plot develops. In his depiction of the interaction between Christy (Cole Litwiller) and the villagers – and especially of the relationship between Christy and Pegeen Flaherty (Courtney Dietz), an attractive, strong-willed, young local woman – Synge explores the effects of social conventions and celebrates the power of the imagination. Theatergoers rioted during initial performances in response to what they deemed to be a degrading portrait of Irish life. Controversy followed productions. Aasne Daniels, Assistant Professor of Theatre also directs: Jasmin Falk as “Widow Quin”, Squire Prince as “Shawn Keough”, Kevin Klein as “Flaherty” and Chris Profitt as “Old Mahon”. Remaining in the cast are: Kage Garza-Smith, Andrew Kinsel, Brianna Klein, Maria Wittenauer, Brooke Kuchefski, Breahna Lesemann, Matt Woodson, Gabe Knott and Brandon Coniglio. “Playboy of the Western World” plays at Sibert Theatre on IC’s campus on April 9, April 14 – 16 at 7:30 p.m., and April 17, at 2 p.m. For Tickets: Call 217-245-3471 or Email illinoiscollegeboxoffice@gmail.com.

Finally, Playhouse On The Square has a busy April with something practically every weekend. To begin the month, Springfield’s Don and Linda Schneider have decided to celebrate their Wedding Anniversary by returning to the stage with one of their favorites, Mark Twain’s “The Diary of Adam and Eve.” If you have not heard this witty and touching version of the Garden of Eden, you will not want to miss this talented couple’s funny and exciting performances on April 2 at 7:30 and April 3 at 3 p.m. On April 22 and 23 at 7:30 and April 24 at 2, Sherri Mitchell will pull-out another tour-de-force one woman show portraying one of Hollywood’s most beloved, yet troubled stars, Vivien Leigh, in Marcy Lafferty’s “Vivien Leigh: The Last Press Conference.” And closing out this jam-packed month of artistic splendor, Rich McCoy directs the American treasure, “On Golden Pond” by Eugene Thompson. This opens first for Springfield Theatre Centre at the Hoogland Fine Arts Center and will move into POTS April 29 and 30, at 7:30 p.m., and May 1 at 2. The show that’s about growing up, growing older and learning to manage the ties that bind will feature Gary Vitale as “Norman”, Ginny Racette as “Ethel”, Rachel Dilinger as “Chelsea” and will also include: Dennis Killen, Jerom Rees and Lochlan Sullivan. Tickets for each and every one of these fascinating theatrical events are available for sale at Our Town Books and The Soap Co. Coffee House or by calling 217-491-3977.