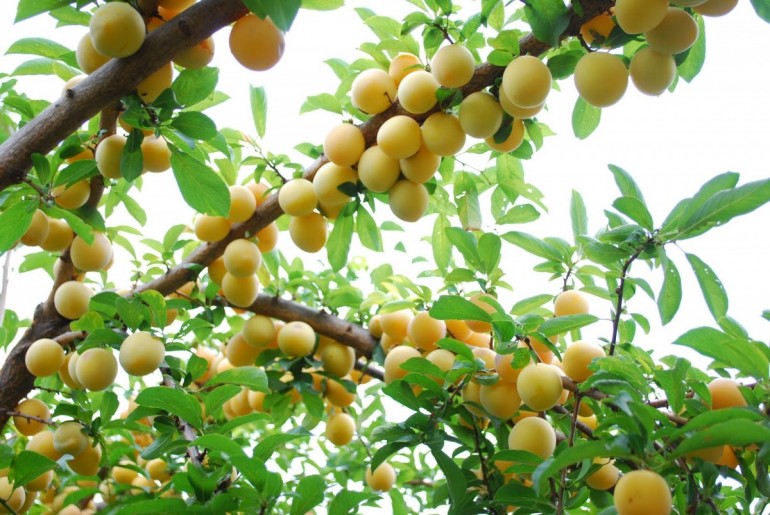 It’s that time of year – time to start thinking about pruning your deciduous trees. Most deciduous trees are best pruned while they are in full dormancy. This happens to be February or March for this part of the country.

While many of our landscape trees don’t necessarily need yearly pruning, the same can’t be said for fruit trees, especially if you want your trees to consistently bear fruit. If fruit trees are left to their own devices they can easily get too tall to easily harvest fruit at the tops of trees. Fruit can also be small and misshapen and can enter into an alternate, or biennial, bearing cycle where you get large production of fruit one year then little-to-no fruit production the next.

The way you prune your fruit trees will depend on the type of tree it is. Typically fruit trees are pruned annually to keep them short so that fruit can be reached, and open so that all branches receive sunlight. For semi-dwarf apple and pear, a standard central leader system is recommended, while an open center system is recommended on peach and nectarine trees. Well-pruned trees are less susceptible to several diseases and are easier to spray.

The first step is to clean up the tree by removing any dead, damaged and diseased branches. Any suckers that have appeared should also be removed. Next, there are two types of pruning cuts to perform on your tree: heading and thinning.

Heading cuts shorten a limb or shoot by removing a portion off the end. These cuts remove the terminal buds that prevent shoot development from buds below the terminal, or end, of the shoot. By doing this shoots will begin developing just below the location of the cut. The number of shoots that develop and the vigor of the growth will depend on how severe you make the heading cut. Heading cuts result in a thicker and denser canopy and reduce light levels within the tree.

Thinning cuts remove an entire shoot back to its point of origin. Unlike heading cuts, thinning cuts do not induce excessive vigorous regrowth. Thinning cuts open the tree’s canopy, allowing more sunlight to reach the interior of the tree.

If you have a large tree that has been neglected for several years, it is best to rejuvenate the tree over a period of three years, making sure to remove no more than one-third of the tree per year. This will help prevent excessive sucker formation as well as sunburn to previously shaded areas of the tree.

While pruning trees, make sure to sanitize pruners between each pruning cut to prevent the spread of disease. You can use a 10 percent bleach solution or isopropyl alcohol. Also, make sure you are using sharp tools. Sharp tools make cleaner cuts which will heal faster than if using dull tools. Finally, when you are done pruning, make sure to clean up and remove pruned wood, especially if it is diseased, and dispose of it.

If you would like to learn more about fruit tree pruning, join University of Illinois Extension for a pruning demonstration on March 17 at 1 p.m. For details or to register visit http://web.extension.illinois.edu/ccgms or call 217-243-7424.