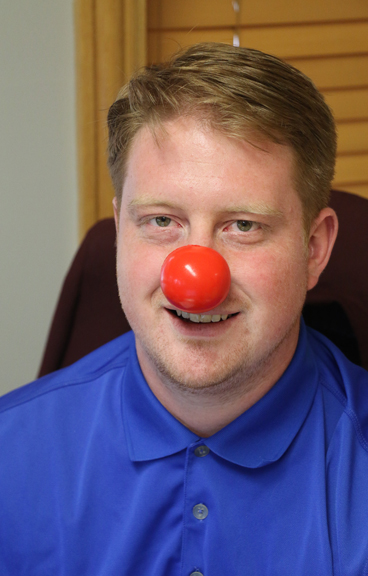 In the movie “Patch Adams”, the late Robin Williams plays a doctor who dons a red nose in order to lighten up the often dreary atmosphere and dispositions of hospitals and their patients. The fictional doctor’s rationality behind this and his other comical antics is that humor, while not a panacea, can play a crucial role in helping to overcome a negative situation. While the movie dealt with illness, another no less harmful scourge affects children of this country and the world: child poverty. The United States Department of Agriculture reports that about 15.3 million children under 18 and living in the United States do not have access to the food and resources required to live a consistently healthy life. And while access to nutritious food is a concern for all ages, it is this subset of the population that is most vulnerable, as those who are younger are still physically developing and less able to provide for themselves. Much like the fictitious Dr. Adams, a charity seeks to use comic relief as a tool to diminish the resulting negative impact of child poverty by raising awareness of the issue.

Red Nose Day was founded by British writer and director Richard Curtis of “Four Weddings and a Funeral” and “Love, Actually” fame. According to the organization’s webpage, “It was created out of the firm belief that the power of mass media and high-profile celebrities can raise awareness of issues of poverty to change and save millions of lives.” Comic Relief UK was founded in 1985 and is the charity behind the creation of Red Nose Day. It launched itself on Christmas Day, 1985 with a live broadcast from a Sudanese refugee camp. Its message is that it can successfully raise awareness of and thus have the ability to affect positive change for “by tackling the root causes of poverty and social justice.” It achieves this goal through the use of mass media in combination with world-renowned celebrities who serve as spokespeople and fund raisers.

The American charity Comic Relief, Inc. is the independent sister organization of Comic Relief UK. It shares the same mission as its counterpart across the Atlantic, which is to “effect Positive Change through the Power of Entertainment.”  It held the inaugural last year naming it Red Nose Day US. It raised an impressive $23 million, with the proceeds being split evenly between the United States and international locations. A few of the organizations that benefit include the Boys & Girls Clubs of America, Children’s Health Fund, Feeding American, and United Way. Together, both charities have garnered more than $1 billion globally in the past thirty years.

Multiple businesses throughout the world show their support by taking part. In the states, Walgreen’s and NBC have established themselves as the most notable domestic participants, with Walgreens being the place to buy Red Noses. The Deerfield, IL based pharmacy has stated that due to the “sell-out success” of last year, it will be expanding its selection of what it deems “Red Flair” merchandise. In keeping with the lighthearted theme Red Flair items will include, but are not limited to, hats, headbands, and oversized bowties. Citing last year’s high demand—five million Red Noses were sold—the company has made the slightly comical swag available from March 28 until the actual Red Nose Day on May 26. Proceeds will go to the above mentioned charities as well as The Vaccine Alliance and Oxfam America. Partnering with Ravi Patel, actor and comedian of Masters of None fame, Walgreens is urging people to spread the message through social media and by holding #RedNose challenges every week, including “Share your #RedNose Mom & Me Flair selfie” and “Share your four-legged friend’s #RedNose look on Facebook, Twitter, and Instagram.

NBCUniversal has established itself as a beneficial partner to Comic Relieve, Inc. Through NBC it plans to host a two hour event on Thursday, May 26 from 10 a.m. to noon in which famous comedians and musicians will perform and help to raise money. This will be the broadcast station’s second such television special and if last year’s success is repeated, it appears likely that it will become an annual event.  Last year’s three hour telethon attracted the likes of Julia Roberts, Bill and Melinda Gates, Sam Smith and John Legend, among others.

So when you see someone walking around town with a bulbous red nose, be sure to laugh along and inform those who might only think that the person is only seeking attention for herself of the real intended meaning. It is often difficult and uncomfortable to talk about the unfortunate realities that befall the millions of less fortunate around the country and globe. Using humor as a segue to discuss such topics is often a successful way to garner the emotion and attention necessary to at least make those previously ignorant aware of something that is much more pervasive than a lot of us care to admit. Feel free to step out of your own comfort zone to if nothing else spread awareness of something no child in this country should experience.