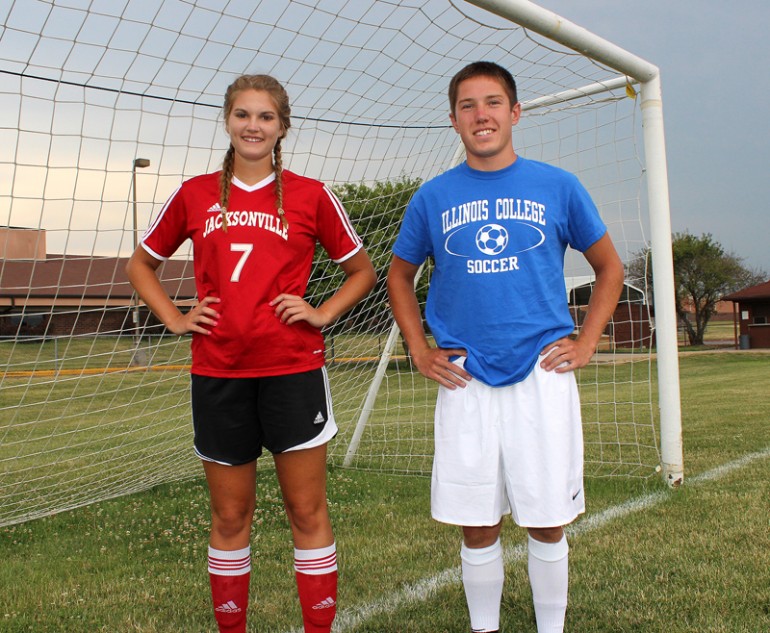 Every year for as long as she can remember, seventeen year-old Ariel Mansholt has been involved in sports. A high school senior, she plays soccer and volleyball for Jacksonville High School. As part of her commitment to athletics, she takes time in the off season to condition her body and stay in shape.  Her father, John Mansholt, coached JHS girls’ soccer for 19 years, and is now MacMurray College’s men’s soccer coach. Coach Mansholt has consistently reinforced to Ariel the significance of taking care of her body in the off season to prevent injuries and improve performance.

Ryan May, a sophomore who plays soccer for Illinois College, also began participating in Team Speed at a young age. He also credits the program with helping him learn the importance of staying in shape in the off season. “I signed up for Team Speed as something to do for the summer, and ended up going back year after year. Team Speed stressed the importance of being active and staying in shape during the off season; an important lesson that has carried over into my college athletic career. The program helped my agility, and overall, made me a better athlete,” he says.

Team Speed began in 1999 and is facilitated by Passavant Team Rehab’s athletic trainer, Kris Schwirderski, who says, “Many athletes want to run faster, jump higher, perform quicker, etc., so Team Speed was created to have athletes work on improving these skills. From the Rehab standpoint, this program should also reduce the incidence of injury if athletes work on improving their overall body strength/core strength and awareness of body in space during movement.”

The program utilizes specific exercise and training programs, focusing on the specific goals of individual athletes.  Team Speed is offered each summer during the months of June and July.  Some participants complete both months if their schedules allow, but it is divided
into monthly modules.  There are two different age groupings offered: fifth through eighth grade, and ninth grade through collegiate. This year the program is being offered at the Bob Freesen YMCA.

Ariel says, “Kris (Schwirderski) definitely pushes me really hard, but I appreciate that because it’s made me a better athlete and Team Speed has definitely prevented injuries and made me faster and stronger.” She says that the program also really boosted her confidence, helping her “get over a mental block” about her ability to perform when she was younger. “I would really encourage athlete to attend. It’s really helped me so much, more than I can explain.”

Ryan agrees. “Team Speed is great. It’s one of the best opportunities you have to better yourself as an athlete. You’ll see great benefits and improvements if you’re looking to participate in competitive sports.”

From a coach’s perspective, Coach Mansholt says, “Team Speed is great for the athlete that wants to get one step higher on the ladder of success. It helps with core strengthening and strength training. The increased muscle strength helps take pressure off the joints – hips,
knees, ankles … which is huge, especially for an athlete. But the biggest thing I think it increases is their confidence level; it increases tenfold. You can see the difference. I would encourage other coaches without hesitation to send their athletes. I encourage my athletes to attend, straightaway. Kris will help them reach their fullest potential as an athlete.”

Schwirderski speaks to the importance of building athletes’ self-assurance, saying, “I hope athletes come away from the program paying attention to their bodies and how they move and that they can improve their movements to make themselves a better athlete and reduce injury, or the incidence of injury. We want kids to realize that they can do anything they put their minds to.  The word ‘can’t’ is eliminated from their vocabulary.  We want them to know that while things may be hard to accomplish, if they work hard and do their best then they can do anything that want.”

As for a parent’s perspective, Coach Mansholt adds that this program is “a sound investment toward being proactive and preventing injuries in the athletic realm.”

Team Speed offers two and three-day a week sessions. Fifth to eighth grade students meet from 10 to 11:30 a.m., and high school and college students come from 1 to 2:30 p.m. The program is already underway, but new athletes are welcome to sign up at any time. For registration, and more information, please contact Kris Schwirderski, Team Rehab, 217-245-9541, extension 3397. Space is limited, and scholarships are available.