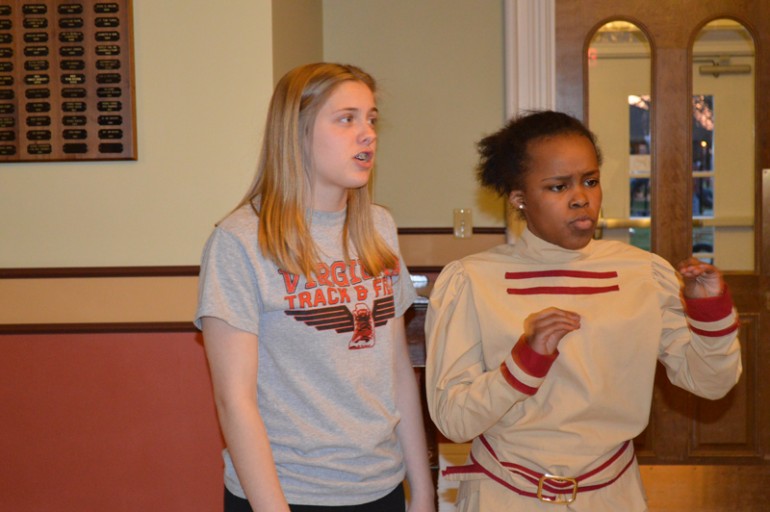 Lincoln Land theater director Ken Bradbury says, “It’s traveling theater, but it’s not what you think.” In this case the actors will stay in the same place and it’s the audience who’ll be doing the traveling, as Bradbury’s LLCC theater class, in conjunction with the ISD theatre club, will present “A Road Trip Through Time” on May 16 and 17.

Each evening the audience will gather in the parking lot of Jacksonville’s First Presbyterian Church on College Avenue at 6:45 p.m., then hop onto one of three buses headed for an evening of watching Jacksonville’s history come to life. During the course of the night each busload of passengers will be transported to the David A. Smith House east of Illinois College, the Main Hall of the Illinois School for the Deaf, and to the Governor Duncan mansion for a twenty-minute performance at each location. Bradbury wrote all three scripts and says that he was amazed at the way the stories intertwined. “Both Duncan and Smith were on the board at ISD, both had major conflicts with the town’s ruling power, Colonel James Dunlap, and the slavery issue was hot at all three places.” All the characters portrayed in the three plays are straight out of Jacksonville’s rich history. “When it comes to Jacksonville history,” says Bradbury, “you don’t need to make anything up. We had the characters.”

The script to be presented at Smith House, “Copperheads and Chamber Pots,” features the children of Jacksonville lawyer and avid abolitionist, David A. Smith. Smith moved to Jacksonville from Alabama with some of his former slaves in search of a land free from prejudice and seeking a good education for his large family. “The Stolen Diary,” to be presented at the Governor Duncan mansion is taken largely from the actual diary of Mrs. Duncan and tells the story of the Jacksonville Governor’s final days. ISD’s Main Hall, one of the most beautiful buildings in Jacksonville, is the setting for “Children of Silence,” a play telling the story of ISD’s founding and the political battles that ensued. It’s here at ISD where the audiences will be treated to a truly unique event as the Lincoln Land actors will join students from ISD in an interesting type of theater. “Unlike a play in which an interpreter to the deaf stands at the side of the stage, in this case the actors will work in tandem with each hearing actor moving in sync with a deaf actor signing his or her lines.” Lincoln Land actor Kyler Miller says, “The concept of the play is interesting mainly because nothing like this has been tried before.” Miller likes what he’s learned. “We’re so different yet so similar,” he says. “I’m having a great time working with the ISD students and I’m thrilled to be a part of the show.” Triopia/LLCC student Courtney Privia said that she was nervous going into the project, but “It’s really been an awesome experience … one of those once-in-a-lifetime chances.” Emily Burns of the Lincoln Land group said she has appreciated the new friendships with the ISD actors. “I’ve really loved working with the group from ISD, and it’s been a blast hanging out with them while we rehearse,” said Burns. “And I’ve enjoyed getting to know my partner, Daniella Bernal.” Daniella agrees that getting to know a new group of actors has been one of the joys of the project although she admits that working with hearing actors has been a bit of a challenge. She explains, “Making sure we are saying the lines together, matching our speeds and patterns and saying things with the same expression has been hard.” Chatjuan Rice is an ISD student who works in tandem with LLCC student Courtney Privia and regards the “Children of Silence” experience as “phenomenal, interacting with the hearing students and watching them act has helped me improve my own acting. Michael Lapa is teamed with LLCC actor Kyler Miller and said that the whole process was more challenging than he had imagined, “making all the lines run together smoothly. But it’s also been a lot of fun learning how to work as one.” 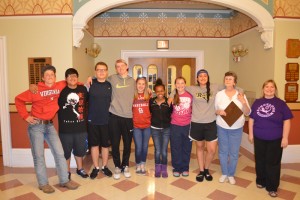 The cast of “Children of Silence” take a break in rehearsal for their play to be presented as a part of the LLCC production of “A Road Trip Through Time.”

The rehearsal process has produced some unexpected results. Says Bradbury, “My students pick up the signing so quickly and we’ve made some pretty cool friendships.” Bradbury has more than once had to remind his hearing actors not to sign. “They’ve learned several signs in rehearsal and their hands keep mirroring what the deaf actors are doing.” The ISD actors are directed by Carrie Grieme and have worked separately from the Lincoln Land actors for several weeks before putting the two casts together. Mrs. Grieme said, “Our students at ISD live with the same small group all the time and some of them crave the chance to see and talk to other teens. This has been a great opportunity for our students to do that.”

Jacksonville’s master costumer, Janet Long, has not only obtained and constructed period costuming for each of the three plays, but in the case of the ISD play she had the additional challenge of outfitting each Lincoln Land actor in a similar fashion as his or her ISD counterpart. “It’s nothing new,” said Janet. “Ken always tells me ‘This is going to be an easy show’ and then it gets complicated.

The performances are a fundraiser for the work on the Duncan Mansion and ten dollar tickets may be purchased at The Source newspaper, Our Town Books, or on line at kenbradbury.org.