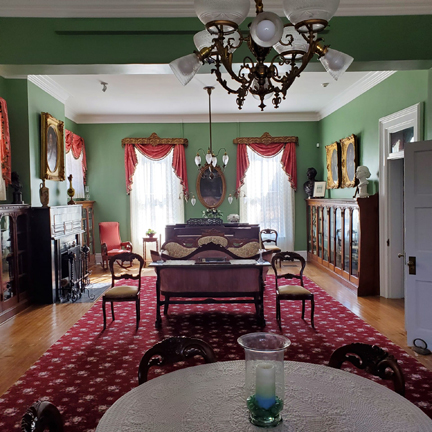 Since the 1800s, Jacksonville has been home to the Illinois Governor Joseph Duncan’s mansion. Gov. Duncan was the sixth person to hold the state’s highest office, from 1834 to 1838. In 1834, the voters of Illinois were asked to decide upon the location of the state capital — six choices were put on the ballot and Jacksonville was one of them.

The ultimate winner that year was Vandalia. However, up until that point in time, governors made their residence in their hometown. The capital moved again in 1839 to its current location, and in 1840, Illinois Rep. Abraham Lincoln introduced a bill that would authorize the purchase of the house and lot in Springfield for the governor’s use. Initially, the bill failed. Yet, eight years later it was revived, and its passing made it so that both the statehouse and the governor’s mansion would finally be in the same city.

During the time Duncan served in office, the mansion was used to conduct state business as well as provide a home for him; his wife, Elizabeth; and 10 children. Their home has been maintained over the years by the Governor Duncan Association (GDA) and the local chapter of Daughters of American Revolution (DAR), the Rev. James Caldwell Chapter. GDA is responsible for the exterior and DAR is responsible for all the interior work.

Over the last 15 years, the mansion has undergone various interior restoration projects during the winter months when they are closed to the public. Previous projects have included work in the dining room, the central hall (all three stories) and the governor’s office. Recently, work was completed in the parlors, except for the window seat in the alcove. The contractor for the project was Kenny Acree. DAR is also working to make the first floor ADA compliant with the addition of an entrance ramp on the west side. Under consideration as their next project is the restoration of the first-floor flooring.

The curator and house manager of the mansion, Susan Hardin, explained how color schemes, patterns and furnishings are chosen to achieve the final outcome. Color schemes are selected from historically correct palates. A historical preservationist is used to check under woodwork for evidence of past work and go through the records they have of previous efforts. Hardin remarked, “We try very hard to maintain the historical home true to the time of the 1890s. That is as far back as we can go without major structural work.” Many of the furnishings belonged to the Duncan family or are period appropriate. The mansion was placed on the National Register of Historical Places in 1971.

All the restoration work done by DAR is funded through various avenues. Annually, the group hosts an ice cream social fundraiser on the front lawn for the community. In addition, this year they will be hosting a BBQ. They also get financial support from gifts, mansion rentals, tours and memorials. Hardin stated, “We host many events at the mansion … weddings, receptions, showers, science club, plays, political events, lawn parties, Easter egg hunts, Kentucky Derby parties, Christmas tours and, yes … even a wake.”

Hardin continued, “I would like people to know that the mansion can be a beautiful location for their event. We are very reasonably priced, and you only pay for what you use. When looking for a location for your event, consider the Governor Duncan Mansion.”

The Governor Duncan Mansion is located at 4 Duncan Pl., on the north edge of Duncan Park just off State Street. The home is open to the public from Memorial Day to Labor Day, Wednesdays and Saturdays from 1-4 p.m. Suggested donation is $5.00 for adults and $3.00 for children. In closing, the curator Hardin has a message to all who read this: “I would encourage people to consider the mansion as a possible donation option when they are considering giving. This generosity helps us move forward in our efforts.”