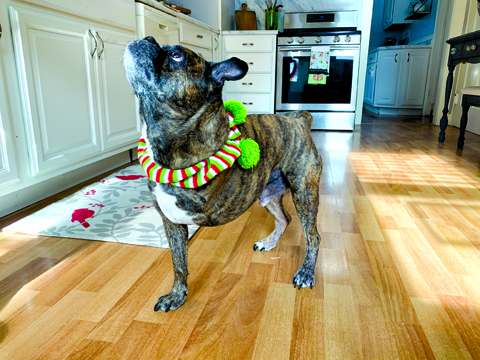 A story for children of all ages

Once upon a time, on a sleepy side street in Jacksonville, IL, an adorable three-legged dog awoke from a long winter’s nap. Yes, you read that right. We’re talking about a three-legged dog. Meet Bentley Parker, a dog whose life story includes a history of epic boxing moves, a few drug overdoses, and countless devious acts that are off the charts clever, hilarious, and at some points, downright unbelievable.

In the first part of this series, we learned how Bentley Parker was smuggled in a purse through church and work, survived a lake dive, and dismantled an entire Christmas party, all in the first six months of his life. Today, the adventures continue …

It was a casual weekday afternoon, and Sarah Lafferty and her family were craving pizza — Little Caesar’s, that is. Piling into the car with Bentley, they headed off to the local joint. They had just received their order in the drive-thru and turned into the parking lot to get the boxes sorted out.

Well, that’s when the fun began. Apparently, Bentley was hungry too, and unbeknownst to them at the time, pizza was Bentley’s favorite food! Sailing out of Lafferty’s lap, he grabbed the top box with his front legs and ripped the lid open. Before anyone knew what was going on, he was rolling through the pizza, chomping all the way!

Sarah and her family helplessly died laughing, while Bentley happily munched on cheese and pepperoni. It was too funny for them to be upset, and although they all were hungry, Bentley was such an adorable fixture in their lives, Lafferty couldn’t bring herself to do anything but cuddle him extra that night.

First the Christmas tree (see Part 1 in the series), and now his flying pizza move! What next? The closest Lafferty could get to taking Bentley to manners class was purchasing a necktie. Yes, a legitimate necktie. He wore it obligingly, and smiled for the camera, but, did it do the trick? Time would never tell, because Bentley was about to embark on a new adventure, one that would alter him for life, but not slow him down in the least.

It happened when he was one-year-old while playing frisbee on a Friday afternoon. While grabbing and returning toss after toss from Sarah, he went after a particularly long throw. He was running really fast and ran right into a mini ditch in the ground. Lafferty shuddered when she said, “I’ll never forget what happened next.”

When his two front legs went down into the groove, his rear went over his head, thanks to the momentum he had from running. There was a horrible snapping sound, and the next thing Sarah knew, she was gathering her puppy up in her arms, in one tearful, whimpering bundle. When she got him into the house, she sat him down and saw that his left front leg was hanging like Jell-o.

At this point, Lafferty was facing a lot of change in her life, and Bentley was the only stable thing around her. She was terrified at the thought of losing him. There was an option for experimental surgery, but knowing Bentley, reinjury was probable.

The next option was to amputate the injured leg. While discussing with the vet, Lafferty made it clear, “I don’t want him to have a compromised quality of life just so I can keep him with me.” The vet assured her that Bentley was young enough to adapt to life with just three legs and scheduled the surgery for Monday — the same day Lafferty was starting training for her new job. It was a tough scenario to explain to her new boss. But Bentley survived the surgery, and Lafferty survived her new job, and they were happily reunited at the end of the day.

The next day, when she carried him into the house, he jumped out of her arms, and in her words, “never missed a beat.” Sure, there were things to relearn, like how to navigate stairs, for one. The vet said, “he will respond to these things the way you respond to them.” Lafferty’s dad stepped in to help with the new training process. And step by confidence-building step, Bentley learned to function wholly.

At times, he got nippy, biting those who tried to move him off the couch or get him to go outside. But hey, if someone cut your leg off, you would probably be aggressive too. The only long-standing issue he had was peeing … how to do that when you are already missing one leg …

Slowly things returned to normal, and Lafferty learned to keep her vet’s number handy. Because sure enough, Bentley always had one more adventure up his sleeve, or his paw, as it were. The next adventure threatened to top the loss of limb adventure, and it happened when Lafferty wasn’t even around.

She had left her purse hanging on a chair by the door, and Bentley knew that all of the pain meds that he had been using post-surgery were tucked away inside her purse. He thought, somewhere in the depths of his doggie mind, taking them all in one dose would be a good idea.

So, he dismantled the purse from the chair (how he did that with just three legs, no one will ever know), somehow opened up the bottle of pills, and proceeded to take them all at once. When Lafferty discovered this fiasco, she was almost hysterical, because by this time she was sure that he had used up all of his lives, and this was it.

A city vet recommended giving him peroxide, which kept him foaming at the mouth for hours. So Lafferty called her vet, who said, “that would work for most dogs, but not Bentley. Just watch him closely.” So they did, and with no symptoms of sickness after 24 hours, they declared that he was fine. To date, the only other drug overdose he gave himself was when he got into Benadryl®, and he did get knocked out for a bit from draining a bottle of that.

What a year for Lafferty and her beloved dog. In their case, love no longer had four paws, but it was no less sincere, and maybe even more adorable because of its uniqueness. Bentley continued growing and learning and developed one peaceful pastime — cuddling, with blankets and on couches, with none other but Lafferty.

But this isn’t the end. There’s more to come — tales of how Bentley was run over by a car and lived to bark about it, how he successfully turned from his destructive ways of rampaging Christmas trees to putting his mark on the Christmas baking, and what Bentley’s life looks like today. So stay tuned for part three in this series, “The Adventures of Bentley Parker.”