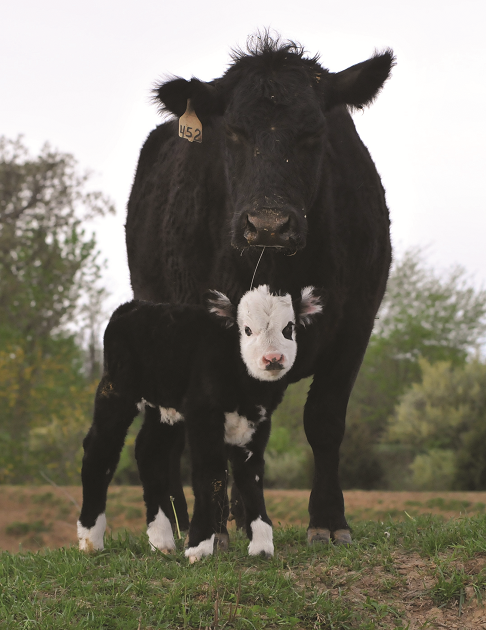 There is nothing like watching a baby calf being born. Gary Hadden of Jacksonville has witnessed more births than most. He and his family have a 250-head herd of cows – each will give birth to a baby this spring.

“We really start March 1 with the majority of babies being born, but a couple will be due next week,” says Hadden. “Is it exciting? Yes. But it’s also stressful.”

It’s stressful to make sure the cows don’t have difficulties giving birth and the baby calves are healthy. The exciting part for Hadden is seeing the result of carefully planned genetics.

Much of his time is spent choosing different genetic traits from any of the 12 bulls and 250 cows and putting them together into the best possible combination for a young calf. Some bulls have more marbling in their meat; some cows give more milk to give the young calf a good start.

“It’s like a puzzle,” said Hadden. “You want to get all the pieces right – and you only know when you see the end product.”

Each cow is identified by a tag in its ear. The tag is tied into a computerized database that is used.

“We know the true genealogy of every animal on the farm,” he says. “That way you can know their best traits.”

He spends hours in front of a computer screen.

The gene pool is increased with artificial insemination of some cows and embryo transfers.

Although most land in Illinois is utilized for the production of grain, cattle herds of various sizes are scattered throughout the state. The largest concentration of cattle is in the northern portion of the state, where rolling pastureland is more suitable for cattle production.

Hadden hopes to add to those numbers.

The calves he produces this year will either be sold in the fall or winter as feeder calves when they reach 500-600 pounds and go to western states or kept for replacement heifers or for showing. Some will be sold for meat to consumers who want to purchase meat for their families.

Can he tell when a mom is ready to give birth?

“Absolutely – you watch their body language,” said Hadden. “They start wanting to be by themselves, become restless, you know. You have to watch them in case they have any problem.