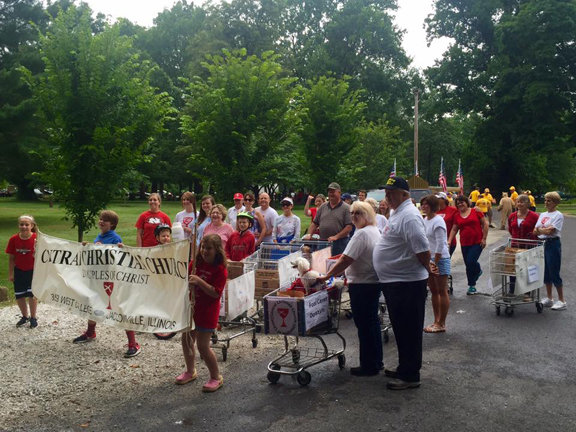 Sometimes the food pantry needs its shelves restocked. And that’s what Central Christian Church set out to do with their Community Food Drive on July 4.

It began when Jeanne Cors, the evangelism chairperson for Central Christian, was looking for ministry outreach ideas. When she came across the idea to use a community parade as a way to gather groceries for the needy, she jumped on it. Networking with the folks at the Rotary Club who were organizing the 4th of July parade, Cors began to iron out the details – advertisements, volunteers and drop points for food.

On July 4, the food drive was on! Using Central Christian’s church bus and a pickup truck, Cors organized a group of around 30 volunteers to walk alongside the truck with shopping carts, collecting items as bystanders placed them in the cart, then unloading the items into the truck as the carts were filled.

Pastor Rex Kibler shares, “Every time someone would donate something, our group would erupt in applause.” Overall, he said that it was a neat experience to see the community contribute so enthusiastically.

Through the drive, Central Christian collected 607 pounds of groceries, which the food center valued at $758.75. In addition to food donations, some people gave cash donations, totaling $1,250.00.

Kibler also shared, “We have had opportunities for outreach to the community concerning food. We’ve often sponsored along with other church and groups … to bring in a truck from the Central Illinois Food Bank once a month.” The need is obviously great, displayed by the fact that, “People start lining up at 8 a.m. for a 5 p.m. giveaway.”

After evaluating the positive impact the drive had this year, Kibler shares that he hopes their church will be able to repeat the process next year, as well.

In closing, Kibler stated, “It was very gratifying to see so many of our own people respond to this opportunity … Also, I appreciate very much Jeanne and her leadership and vision. Finally, it was fun to watch the support [from the community] and the folks at the food bank to see their shelves restocked.”

Overall, Kibler reflects that the food drive was “an attempt on our part to serve the community, to make Jesus famous and God proud.”