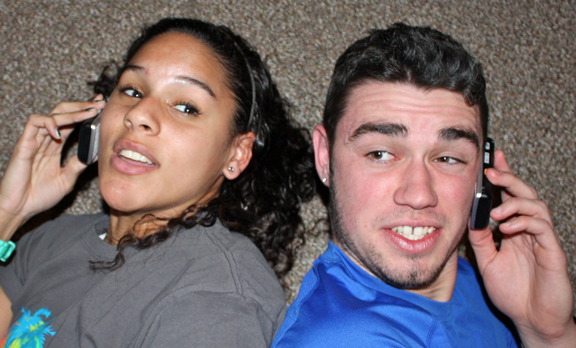 Jacksonville’s one and only improv comedy troupe will be taping their next show for cable television on Sunday, August 14 at 6 p.m. The “Let’s Make Up” cast, under the direction of Ken Bradbury, will tape two half-hour shows for later broadcast at the Playhouse on the Square theater with free admission to all audience members. “All we ask,” said Bradbury, “is that you not only have a good time, but make some noise. This is TV and we don’t use a laugh track.”

The “Let’s Make Up” players consisting of John Love, Erin Washington, Hope Cherry, Nate Saint and Brandon Coniglio, have been regulars on the Cass Communications network since last spring with their shows airing every Wednesday and Saturday night at 7:30 p.m. The group first came together at the Green Pastures Camp for the Performing Arts several years ago and have performed at various venues around Central Illinois, most recently landing a contract with Cass Communications.

Illinois College senior Erin Washington describes the group as, “sort of a crazy explosion of ideas. We came together and found that we could trust each other onstage. If somebody goes blank, there’s always someone there to pick up the ball and run with it.” Improvisational comedy takes ideas from the audience and creates a comedy sketch right there on the spot. John Love, a recent Illinois College graduate said, “You really don’t have time to think, just react.” So what happens when everyone draws a blank at once? Love said, “Then you do a scene about drawing a blank. It’s a lot like skydiving. You jump, but you’re never quite sure where you’re going to land.”

Previous tapings of the show have drawn full houses at The Playhouse on the Square, so audiences are encouraged to arrive promptly.