It’s that time of year again. The mad holiday rush for Thanksgiving is over and the mad holiday rush for Christmas, Hanukkah and the myriad of other winter celebrations is just beginning. But between the two holiday seasons, when our drive to put on spectacular holiday parties ironically segments families and friends into a series of isolated tasks that need to be accomplished rather than bringing them together as a larger community, there is an often-overlooked adolescent tradition that warrants just as much attention from the residents of Jacksonville: the “Winter Play.”

The Winter Play is a time-honored high school custom, affording creative and outgoing students the opportunity to show off a unique skill set that is too often overlooked in education today. Those who attended the play were treated to a first-hand look into what Jacksonville’s student body is capable of: performing complex scenes of comedy and drama in front of a live audience of family and friends.

Lynette Cervi, a five-year veteran teacher at Jacksonville High School, has been in charge of the school’s plays for the past three years. Despite how well this year’s performance went, she confesses that budgetary constraints necessitated a more modest production: two one-act plays, each lasting for approximately one hour, with a brief intermission between them. 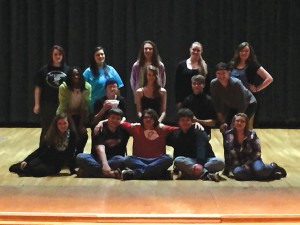 There was not a big, showy play with lavish set pieces and opulent costumes. What costumes and props could not be scrounged up backstage needed to be provided by the students themselves.

Necessity is, of course, the mother of invention, and budget was never the sole factor that determines the quality of the show. Having observed the cast develop from early rehearsals to public performances, I can assure you that the students were both enthusiastic and talented. They were not only convincing on stage, but endearing and believable as the characters that they were portraying.

The first play was be “The Actor Games,” written by playwright Wade Bradford. This Hunger Games spoof, set in a dystopic future where each acting style (including Grecian Tragedy, Post-Modern Absurdity, Shakespearian Drama and Silent Film) has been segregated into separate districts, coming together only once every year to compete in a districts-wide audition, held by the nefarious Director. The single victor to emerge from the games will live out his or her dream of being a famous actor, while the disgraced losers will be forced into an increasingly ironic and hellish set of theatrical professions.

The second play, Bradley Walton’s “We’re Not Making This Play Up As We Go Along – Honest!,” was itself a play about putting on a play. When most of the cast call in sick the night of the big performance, they had to be replaced by an inept crew who do not know their lines, let alone the larger story that they now have to act out.

The plays were performed at Jacksonville High School, located at 1211 North Diamond Street on December 4th, 5th and 6th. If their performances of these two plays are any indication of what these student performers are capable of, you owe it to yourself – as a family member, friend or neighbor – to see their next theatrical production.