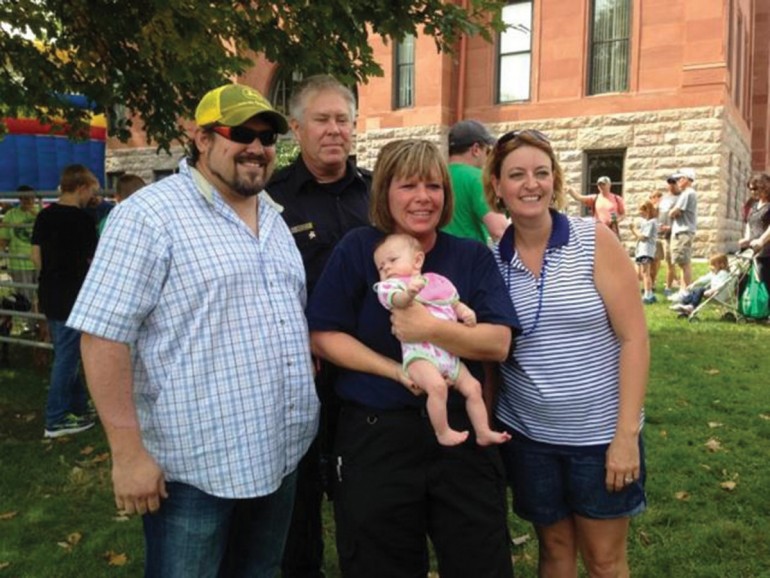 This Christmas season, Jacksonville native Jeni Sprinkle has a very special ornament hanging on her tree; a pink stork. And in Delavan, Illinois Erika Sipka has a very special little girl in her arms; five month old baby Kaydee. These two women share a remarkable bond, one that Sipka never expected when she found out she was expecting.

On July 4th of 2014, a then pregnant Sipka and her family were camping at the N.S.P.O.A. Campground, located just four miles northeast of Petersburg. Sipka was in the midst of enjoying America’s Independence Day holiday when suddenly, she felt her water break. Due to her pregnancy being labeled by doctors as high risk, Sipka’s mother in law instantly called 911.

Within minutes Menard County Emergency Medical Services arrived at the campground, including paramedics Jeni Sprinkle and Mike Burg. After loading Sipka in the back of the ambulance, the vehicle began racing to Springfield’s St. John’s Hospital, where Sipka hoped to deliver the baby. However, little Kaydee had other plans.

“I was in labor for about a span of 20 minutes, and Jeni actually delivered my daughter, with Mike sitting by my side. We were inside the ambulance as it was moving down the road,” described Sipka. “Certainly not the way I had planned it, especially with my third child!”

The delivery was a first for Sprinkle, nonetheless, Sipka has no complaints.

“Jeni was very emotional afterwards, obviously we all were. However, it was the best delivery I’ve ever had, even though it was in the back of the ambulance,” added Sipka.

Despite Kaydee’s unique arrival, she was born as a completely healthy and beautiful baby girl. The newborn was eagerly welcomed to the family by big sister McKinleigh and big brother Izayah. Sipka and her husband, Justin, say their little bundle of joy’s unique birthdate has earned Kaydee a nickname that keenly fits her personality.

“We call her our little firecracker because she was born on the 4th of July. For the first six or seven weeks she had her days and nights mixed up. She’d party all night and sleep all day. So she’s definitely living up to her name,” noted Sipka.

In the months following Kaydee’s birth, Sipka thought about Sprinkle and Burg frequently, but had not been in contact with either paramedic. It wasn’t until the Sipka family attended a fall festival in Petersburg this past autumn that the group reconnected.

“My parents told me that the rescue team was cooking pork chops at the event and that Jeni and Mike would probably be there. So we went to the parade and I saw Jeni in the ambulance throwing out candy. I hollered at her and as soon as she saw me she started crying and I was crying,” Sipka shared. “After the parade we found her and Mike and they both got to hold Kaydee and there were hugs and more tears.”

Since the initial meeting this past fall, Sipka has remained in contact with Sprinkle via Facebook. Recently, the Sipka family visited their two favorite paramedics, but this time they had a delivery for them. The duo was presented two very fitting Christmas ornaments; a pink stork for Sprinkle and an ambulance for Burg, a token of appreciation for a very special delivery.