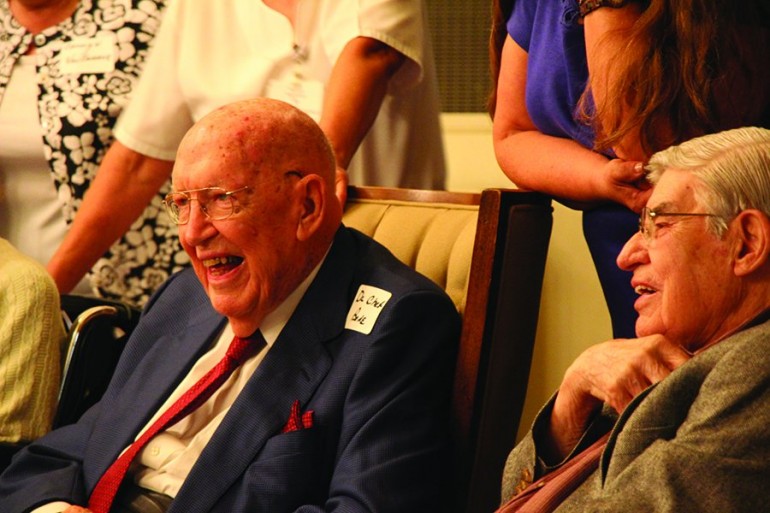 Ernst Chester Bone, M.D., is a name quickly recognized, and seemingly to follow his mention is praise and positive review. At a recent party for past employees of the Bone-Scott Clinic, I was given some moments of his time and with every minute that I sat with him, listening to his words and hearing the kindness in his voice, I began to realize from where the adoration came.

Ernst Chester Bone, M.D., decided to become a doctor during his role as Director of Admissions at Illinois College. It was 1938 when he accepted the position; however, he was told one day on campus, “Bone, I didn’t teach you all that biology to sit in this office. Get out of here and go to medical school.” Shortly thereafter, Bone had not only completed the course in embryology needed to enroll, but also attained his Master of Education from the University of Illinois. Bone signed up for medical school in 1942 and managed to complete his medical degree whilst serving in the U.S. Navy during World War II and also the Korean War. After medical school, Bone had one year of post-graduate training at the Illinois Research and Education Hospital, where they asked him to stay on to get his residency in Neurosurgery or General Surgery, but Bone said they were only paying $25/month for residents at that time.

So, he returned to Jacksonville and was “monitored and mentored” by General Surgeon, Dr. Ellsworth Black. “I scrubbed with him every morning for four years and learned a lot of surgery from him. I started in the general practice of medicine at that time…delivered babies, fixed broken arms, whatever came in the office,” said Bone. This was now 1947 when Dr. “Chet” Bone established his medical practice on West State Street. Bone added that, “The nurses kept track of my (baby) deliveries until I stopped, and they said I delivered 4500.”

In June of 1955, Drs. Bone and Scott started the Bone-Scott Clinic. Bone said of Dr. Harvey D. Scott, II, “He was the most wonderful partner a man could ever have….he was an excellent surgeon, but was also willing to see patients with general problems and was willing to take his turn making house calls, which we did every night.” Bone chuckled when I asked if he knew when his last house call was, responding after the laugh, “After I retired.” He considers 1989 to be his retirement date from clinical practice. However, he didn’t actually retire, but started work with the Bureau of Disability Determination Services in Springfield and, quite impressively, Bone still works three days a week (at age 99) for the Bureau, traveling back and forth with Dr. James Hinchen each week. He continues his work because he loves people and moreover, helping them. He’d guess that he has ‘helped’ about 20,000 patients over the years.

In the world of medicine, the biggest changes Bone has seen over the years are the changes that have been made in cardiology, the computerization of medical practice and also the discontinuance of solo practitioners with the current requirements for corporations that almost mandate doctors being in groups. Beyond the world of medicine, Bone grew up on a farm and has always enjoyed farming. He has a love for education, with nine years on the District #117 Board of Education, two terms as Trustee of Illinois College, and he guesses 30 years of Trusteeship at MacMurray College. Over the years, he has also received many awards and recognitions, including Jacksonville’s Citizen of the Year and Illinois’ Family Physician of the Year. 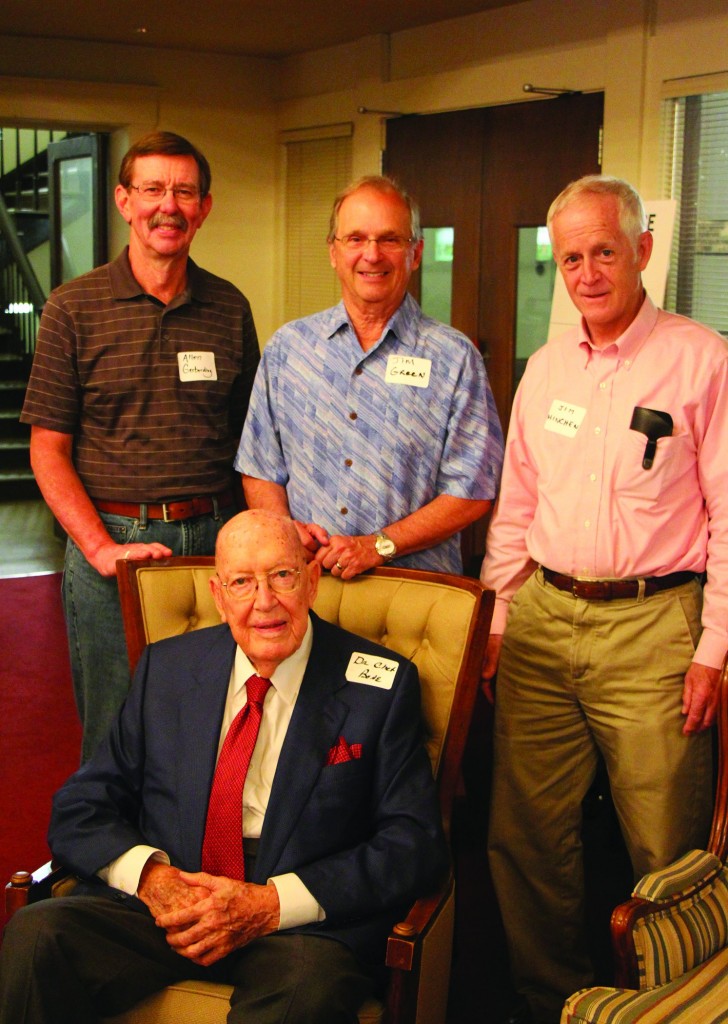 The lovely turnout at the Clinic’s celebration is one illustration of the respect and fondness that the many nurses, doctors or staff have for this man, now 25 years after the Clinic’s closing. Dr. Bone will be celebrating his 100th birthday on March 3, 2015. He said he may be in Naples, FL, for the occasion with family and friends, looking forward to coming back for a larger celebration in the spring or summer of 2015 in Jacksonville. “That’s optimistically thinking that I’ll still be alive,” he joked. Bone has treated and helped many in the community, but clearly he’s enjoyed and still enjoys the journey of his life. That day’s events ended with a circle of story-telling, regaling and laughter. Hats off to Dr. Bone.